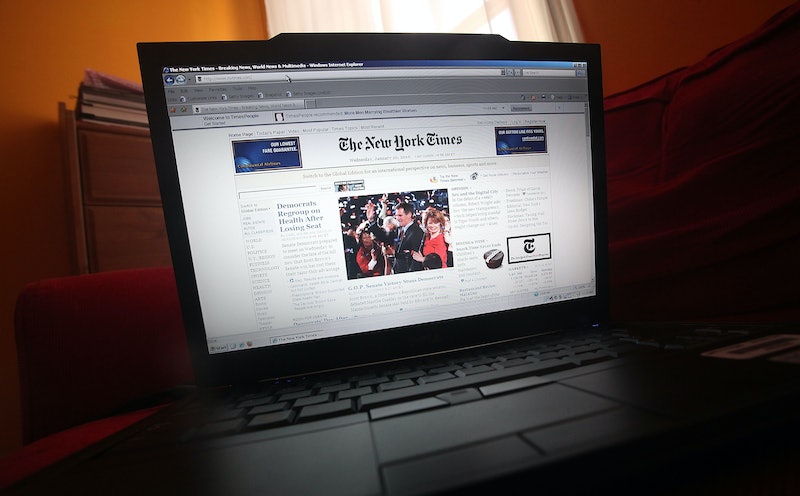 In addition to its usual Election Day coverage, the New York Times has a self-care page called 'The Calm Place" to reduce midterm-related anxiety. It features soothing audio and video, some basic meditation exercises, and even a comfort dog you can "pet" with your computer's trackpad or mouse.

"Elections are happening," the page says at the top. "This is not about them." Below is a collection of media intended to promote self-care: a video loop of a field blowing in the wind, deep breathing instructions, an incredibly satisfying video of oranges falling into water in slow-motion, a reminder to think of the last thing that made you smile, and more. The page also features a GIF of a dog who breaks into a smile if you click on his or her fur, and instructs users to "close Twitter, Instagram and Facebook."

Although the Times hasn't offered any explanation for why it created The Calm Place — Bustle has reached out for comment — one can't help but wonder if it was inspired by how the newspaper covered the last election. In 2016, the Times created an animated ticker that tracked the presidential race's odds in real-time, and it ultimately became a source of scorn and trauma for progressives when it showed Donald Trump's victory unfolding in agonizing detail over the course of the night.

The Times did bring the needle back for 2018 despite all of the criticism it received, noting that it's just one way of following the results. Many other news sites have their own real-time election trackers, including Vox, FiveThirtyEight, Politico and more.

For many on the left, the importance self-care became much more salient after their experience in the 2016 elections. One study found that one in four college students experienced clinically-significant, post-election distress after Trump was elected, while many psychologists have given anecdotal reports of patients experiencing Trump-related anxiety in the two years since the election.

As such, many progressives have entered the 2018 midterms fearing a repeat of 2016 — that is, an unexpected Republican victory that flies in the face of pre-election polls, all of which strongly indicate a Democratic takeover of the House of Representatives. Most elected Democrats have been cautious and measured in their expectations, with very few flat-out predicting that a "blue wave" will sweep the country.

The Times self-care page, which comes courtesy of the newspaper's Style section, could serve as an effective remedy to some of that anxiety. In addition to the aforementioned content, the page also includes links to related articles at the Times about meditation, stress management, happiness and more. At the very bottom, there's an option to "send this to a stressed friend."

All of that being said, Democrats do have reason to be cautiously optimistic about Tuesday night. Although most polls suggest that Republicans will keep control of the Senate, the prognosticators at FiveThirtyEight predict that Democrats will win around 35 seats in the House. That's more than enough to win control of the chamber, and would make it significantly more difficult for Trump and congressional Republicans to pass any more legislation without significant Democratic support.