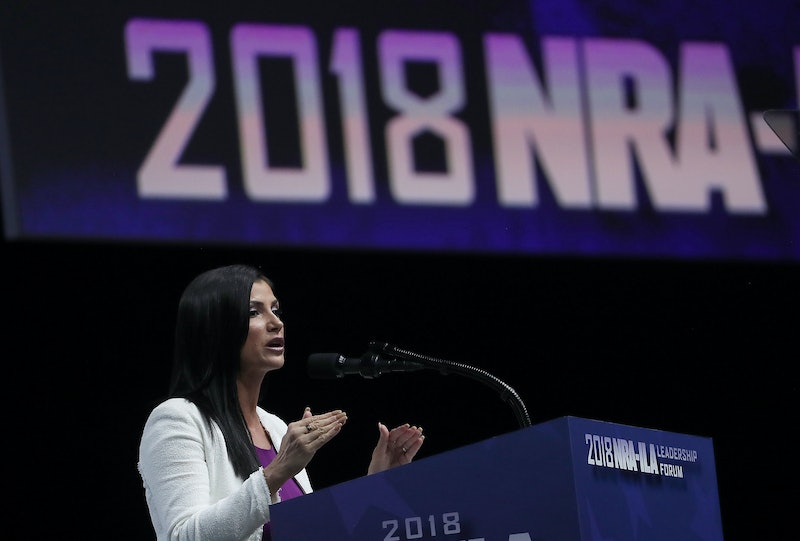 The National Rifle Association (NRA) appears to have inserted itself in a debate over including a "red flag" provision in the bipartisan Violence Against Women Act. The NRA is opposing the provision to temporarily restrict gun access for domestic abusers, The National Journal reported on Wednesday, and attempting to "dissuade" lawmakers from voting for it by dangling the threat of low "percentage points" from NRA supporters.

The "red flag" provision would allow people and law enforcement authorities in some states to request judges to temporarily ban a person from accessing firearms if they are credibly viewed as a threat to others and themselves. It's meant to remove access to firearms for those who have been convicted of domestic abuse and stalking.

Yet the NRA has been pushing against it, The National Journal reported. "The NRA opposes domestic violence and all violent crime, and spends millions of dollars teaching countless Americans how not to be a victim and how to safely use firearms for self-defense," NRA spokesperson Jennifer Baker said in a statement to The National Journal. "It is a shame that some in the gun-control community treat the severity of domestic violence so trivially that they are willing to use it as a tool to advance a political agenda," Baker added. Bustle has reached out to the NRA for comment.

House Speaker Nancy Pelosi criticized the NRA's opposition on Tuesday. "Members have a decision to make: will they protect survivors of stalking and domestic abuse?" Pelosi tweeted. "Or are they willing to allow their convicted stalkers and abusers to have access to firearms?"

Gun control advocates are likely to support this expansion in the Violence Against Women Act. There's a documented link between gun violence and domestic abuse; The Giffords Law Center, a public interest law center that studies gun violence in America, noted in a report that "abused women are five times more likely to be killed by their abuser if the abuser owns a firearm."

And legislation that temporarily restricts gun access for those convicted of domestic violence is "associated with a reduction in the number of intimate partner homicides," the report said.

While the NRA has chosen to oppose the "red flag" provision, some Republicans have expressed an interest in supporting it. According to The National Journal, Ohio Republican Rep. Steve Stivers said, "I’m not opposed to red-flag laws, depending on how it works."

"We have to do some things," Stivers added. "From my vantage point, red-flag laws are one of the most effective ways, if they’re done with important controls because you’re talking about a right."

Gun control advocates have long stressed upon the significance of "red flag" provisions. The nonprofit Everytown for Gun Safety noted in March that when an individual is considering physically harming someone or themselves, that person's family and local law authorities are frequently the first people to spot the problem. In such cases, "red flag" laws can help prevent potential violence from happening.

For now, only 14 states plus Washington D.C., have existing red flag laws, according to Everytown. The NRA's opposition to the "red flag" provision aside, Everytown noted that, in general, it's a "common-sense way" to practically tackle the issue of gun violence in America.