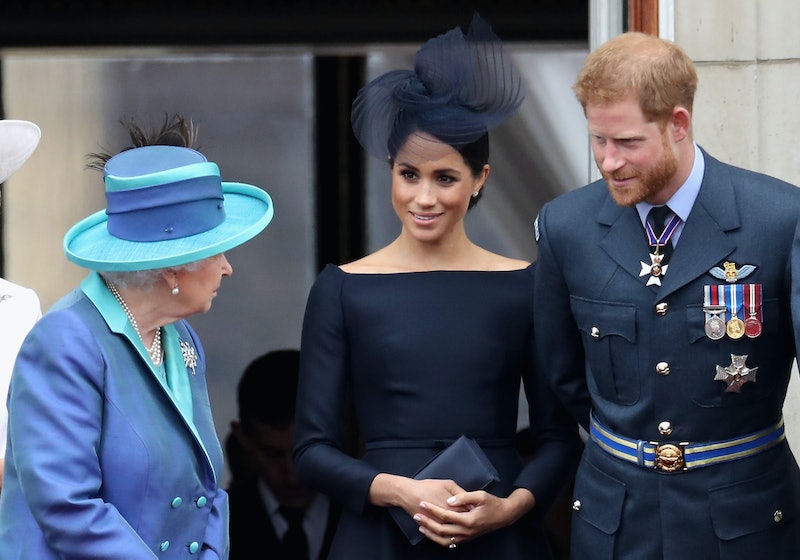 Over the last few days, cities across America have erupted in protests, angry about the deaths of George Floyd, Breonna Taylor, Tony McDade, and Ahmaud Arbery, and putting police brutality and racism firmly, and rightly, on the global agenda. Many celebrities have spoken out, lending their support to Black Lives Matter and sharing meaningful ways to support Black people right now. The Queen's Commonwealth Trust joined those ranks today, saying "it is time to speak up and speak out."

The Queens Commonwealth Trust — headed up by Queen Elizabeth, Meghan Markle, and Prince Harry — shared a quote by Martin Luther King Jr. via Twitter in support of activists and protesters. “Young people are vital voices in the fight against injustice and racism around the world," the post read. "As a global community of young leaders we stand together in pursuit of fairness and a better way forward. Silence is not an option. #BlackLivesMatter.”

In a subsequent tweet, The Queen's Commonwealth Trust, which supports young people and leaders around the world by connecting them with mentors and resources, wrote: “We all have the power to effect positive change. It is time to speak up and speak out. Time to have uncomfortable conversations with ourselves and with others. Time to educate ourselves and unlearn. Time to come together and build a better future as one. #QCT.”

Working across 54 countries the Queen’s Commonwealth Trust supports individuals and projects tackling issues like poverty, the effects of climate change, lack of access to health care and education, and employability. Prince Harry and Meghan Markle currently serve as president and vice president.

More like this
Rita Ora Finally Opened Up About Marrying Taika Waititi & Their "Perfect" Wedding
By Sophie McEvoy and Catharina Cheung
This Is When Netflix Is Going To Start Charging You For Sharing Passwords
By Darshita Goyal
Harry Styles Just Split His Pants In Jennifer Aniston’s Face
By Sam Ramsden
Taylor Swift & Harry Styles Had A Secret Reunion At The Grammys
By Shahed Ezaydi
Get The Very Best Of Bustle/UK
Sign up for Bustle UK's twice-weekly newsletter, featuring the latest must-watch TV, moving personal stories, and expert advice on the hottest viral buys.