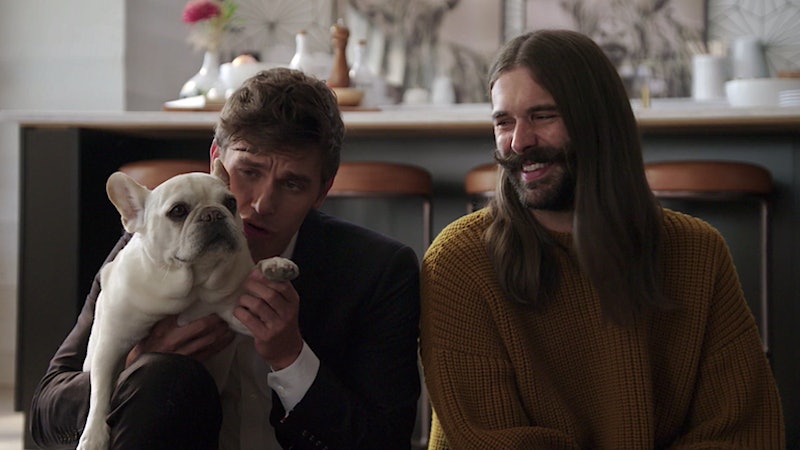 Everyone loves the Fab Five, but it was the Queer Eye dog Bruley who proved to be the breakout star of Season 3. Though he only made a few brief appearances on the show, it's clear the adorable bulldog belongs on the Queer Eye team — even if it's only in an unofficial capacity. And if you thought you loved him on camera, just wait until you see Bruley's Instagram account.

Seriously, forget all of the other celebrity accounts you follow, because Bruley's is truly the only one that matters. The pup's page is covered with precious photos of him doing what he does best: being really stinkin' cute! From celebrating Pride Month to rocking some amazing Game of Thrones attire, Bruley's posts have a little something for everyone. And if you're looking to feel motivated or simply get out of your Monday morning funk, this good boy has got you covered with some inspirational captions.

So while Antoni Porowski, Tan France, Karamo Brown, Bobby Berk, and Jonathan Van Ness may be at the top of your follow list, make sure you don't overlook this pivotal member of the team. Otherwise you might miss out on some heart-melting posts that prove Bruley is living his life in the most fabulous way possible. For example...

His Vacation Attire Is A Work Of Art

He's A Big Fan Of Naps

Who isn't, really? But are your snores nearly as precious as dear, sweet Bruley? (That's a rhetorical question, by the way, since that is simply not possible.)

He Has A Wide Range Of Passions

He Goes All Out For The Fourth Of July

He may be a French bulldog, but that doesn't mean he can't put his American pride be on full display when the situation calls for it. Anyone else super jealous that this wasn't their Fourth of July outfit this year? You may have wanted some pants to go along with it, but that hat and glasses combo is perfection.

He's A Firm Believer In Self-Care

The Fab Five are always looking sharp, so Bruley knows he needs to be at the top of his game with his grooming and styling. But as you can see, he's more than up to the challenge.

His Networking Skills Are On Point

Just in case you ever wondered what a Stranger Things and Queer Eye crossover would look like, here's a taste. Someone greenlight this spinoff series ASAP! They are total squad goals and that Mind Flayer doesn't stand a chance.

He Loves His Costars

If you didn't already want to be Karamo, this pic will make you wish you could be in his shoes for a day, if only to snuggle with Bruley.

Here's to hoping we see a lot more of the Queer Eye dog when Season 4 hits Netflix on Friday.