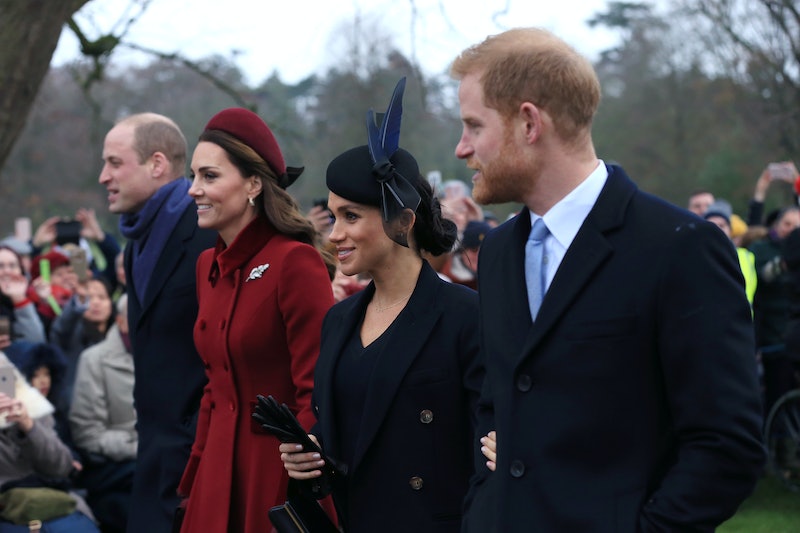 With another year on the books, lots of people are reminiscing about the most memorable moments from the last 365 days. To participate in that universal tradition, the royal family shared a year-end video highlighting their favorites. And now that all of their accomplishments are compiled into a three minute clip, it's hard to believe that much happened in such a short amount of time.

Of course, perhaps the two most monumental milestones for the royals this year were the welcoming of two new family members: Her Royal Highness The Duchess of Sussex, Meghan Markle, and Prince Louis of Cambridge, Prince William and Kate Middleton's youngest son, now 8-months-old. The whole world tuned in to watch Meghan and Prince Harry be married, and people everywhere gushed over photos of Prince Louis and his siblings, George and Charlotte. And we can't forget the amazed (but unsurprising) reaction Middleton received from the public when she emerged from the hospital in heels after giving birth.

Those little snippets are only a glimpse into the royal family's 2018. Because they're always on the go, they have a lot to recap, including tours, charity events, and more.

"Here are some of our favorite moments from 2018 — thank you to everyone who made this year so special," Kensington Palace's official account tweeted on Saturday, Dec. 29.

The video sees Middleton doing what she does best, mingling and chatting with school children, attending charity events, and of course, looking simply stunning. It also displays her grand opening of a new headquarters for Place2Be, a children's mental health charity.

Some of Markle's most significant landmarks in her first year as a royal family member are highlighted as well, including her first outing with Queen Elizabeth, and her royal tour with husband Harry, which promoted young leadership and conservation efforts across four Commonwealth countries. On the same tour, the newlyweds announced that they are expecting their first child in the spring.

The video also reminds all of us of the Fab Four's unbreakable bond. Although rumors recently stirred regarding a potential feud between the brothers, the footage here highlights the many challenges and achievements they've all embraced together, including the first annual Royal Foundation Forum, which occurred in February. That's when Markle called the group's bond "togetherness at its finest," according to People.

Other traditionally held annual events are recapped in the clip as well, like the Trooping of the Color and Remembrance Day events, and some adorable photos from Prince Charles' 70th birthday are in there as well. And even though the holiday just passed, the video includes footage of the family's annual walk to church on Christmas Day, in which it looks like they're getting along just fine.

It feels like the world celebrated Prince William and Kate's marriage just yesterday, and now, both of the brothers are married and expanding the royal family. Pretty soon, they will be welcoming its newest member. As for the rest of 2019, who knows what surprises are in store.