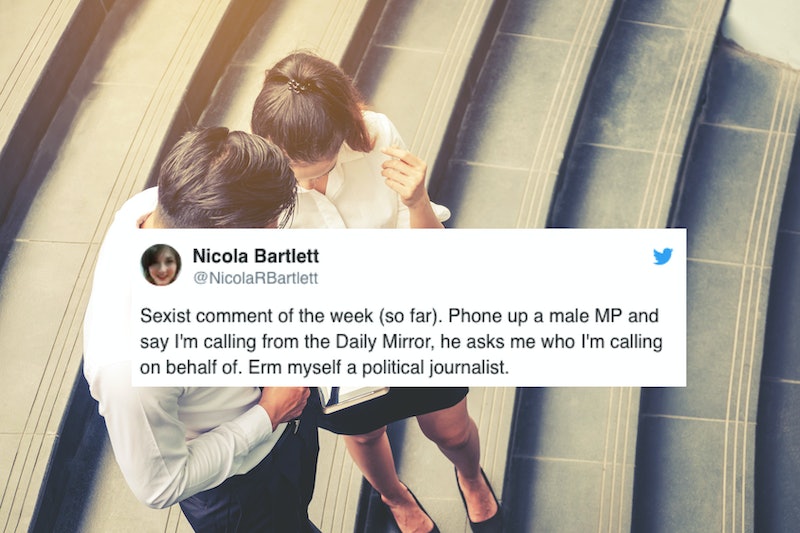 It’s no secret that workplace sexism still exists — but it’s not just seen in the big picture issues, like the wage gap or sexual harassment. Since Jan. 30, people on Twitter have been sharing the sexist assumptions about their jobs they experience every single day, and the stories are staggering. They shouldn’t be — we should know by now to expect it — but time and time again, it's still mindblowing to remember that this kind of sexist behavior is still alive and very, very well.

The conversation began with a tweet from journalist Nicola Bartlett. Bartlett, who is currently a political correspondent for the Daily Mirror, tweeted yesterday, “Sexist comment of the week (so far). Phone up a male MP and say I'm calling from the Daily Mirror, he asks me who I'm calling on behalf of. Erm myself a political journalist.” Understandably, Bartlett’s tweet struck a chord — and in the day since, Twitteruser after Twitter user has chimed in with their own experiences, illustrating how widespread these kinds of sexist assumptions are.

As you might expect, most of the stories are from women; what’s more, although the details of each story might vary, they’re often pretty much the same story: A woman is in a position of power or holds a job in a male-dominated industry (or both!); someone — typically a man, although not always — approaches them, either in person or on the phone; and that someone immediately assumes the woman is “just a secretary.”

Workplace sexism has been well-documented — but frequently, we seem to be willing to overlook all but the most egregious and overt examples of it. Casual sexism, implicit and/or unconscious bias, and other “softer” forms of sexism often go unremarked upon; indeed, not only do we tend not to want to admit that there’s a problem, many don’t even see that there’s a problem in the first place.

Both of what social scientists consider to be the two main forms of modern workplace gender bias — descriptive bias, in which the traits traditionally ascribed to women don’t line up with the (usually) male traits believed to be necessary to maintain specific jobs, and prescriptive bias, in which, as FastCo’s Eric Jaffe puts it, “[when] women who do break through and claim a traditionally male position are seen to have violated their prescribed norms” — stem directly from sexist assumptions. But by never challenging those assumptions… well, that’s how we end up in 2018 in a world where men are still given more big projects and promotions than women, and where women who sit at desks near a man’s office are immediately assumed to be the man’s assistant. These assumptions affect both big picture issues and everyday ones —and they both need to stop.

Although the majority of the stories are from women, there are exceptions; some men have chimed in with astute observations about how they’ve experienced the workplace in comparison with how their female colleagues have, for example, while others who work in traditionally “feminine” occupations noted the pushback they face that their female colleagues don’t.

Note, too, that there is nothing “just” about secretarial and administrative work — and in that respect, the stories are doubly, or even triply, damning: Not only do they illustrate how frequently people think that women aren’t capable of doing certain jobs, but moreover, they also show how common it is for people to devalue secretarial work in general. Given that our culture usually codes secretarial work as “feminine,” it also demonstrates the tendency for society to devalue feminine things.

All in all, the stories in the thread show exactly how far we still have to go when it comes to eliminating sexism in the workplace — and in our culture at large.