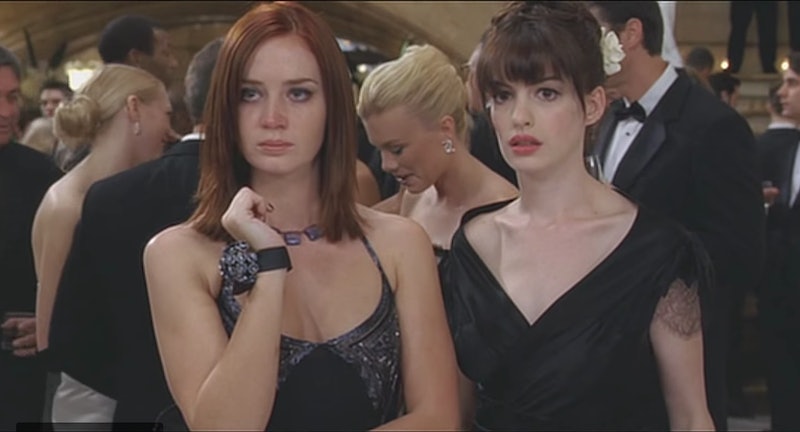 Since its release in 2006, The Devil Wears Prada has been positioned as both a charming dramedy and a lesson in self-worth and workplace toxicity. A young, aspiring journalist lands a gig at an iconic fashion mag, only to have its hardened, all-powerful editor-in-chief turn her job into a living hell. But a recently unearthed deleted scene from The Devil Wears Prada suggests Miranda Priestly may have not been the uncaring ice queen she seemed to be.

The clip, shared by YouTube user Devonne Arnaz, was posted back in 2015, but has reemerged online over the last few days. It takes place during the scene at the big charity gala where Andy and Emily were tasked with keeping track of who's who at the event. In an uncharacteristic moment of kindness, Emily says that she can handle things from there, freeing Andy up to make it to her boyfriend's birthday dinner. But just as she turns to walk out, Miranda's husband shows up and starts acting like a drunken snob. Andy immediately steps in to mitigate the situation, and in turn, Miranda mouths a silent "thank you" to her for averting potential disaster.

It's a telling moment, because while it's always clear that Miranda is impressed by Andy, she refuses to vocally acknowledge it for the entirety of the film.

Here, though, she is openly appreciative, which casts a new light on the dynamic of their relationship. Perhaps Andy put up with Miranda's cruelty for so long because she knew that, deep down, she wasn't as callous as she'd like everyone to think.

Needless to say, fans were taken aback, with some in utter shock and others understanding why the scene was ultimately axed.

Still, it's always nice to peek behind scenes — especially when it adds such a different perspective to the beloved movie.