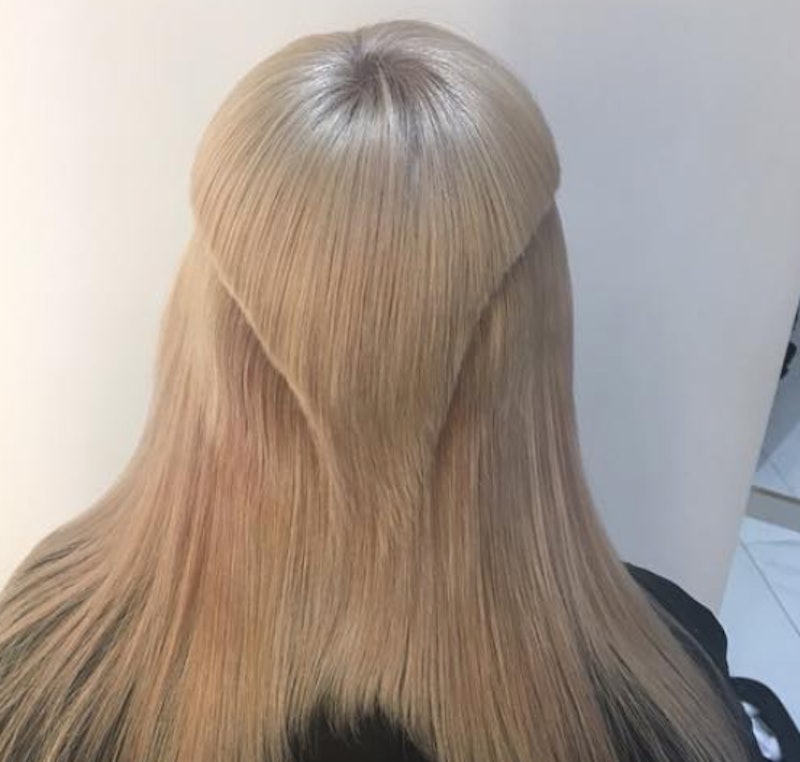 If you are going to get a mullet in 2018, you might as well go all in. That's just what this visionary stylist and his client did with the futuristic mullet that is the talk of Instagram. The mullet has always had a murky history as one of the most maligned looks of the '80s. But this is unlike any hairstyle you've ever seen.

Stylist John Vial shared an image of the otherworldly mullet he cut into a woman's long, white blonde hair. The pic captured the cut from four different angles. It's certainly a three-dimensional and structured style. It's weird, it's funky, and it's a display of Vial's artistry.

The top looks like a removable cap. The cut also boasts blunt, super short bangs that taper into a wing in the back. The rest of the hair is stick straight. The back is cut in varying lengths, which adds a whole other level of "Whoa!" to the design.

This 'do is not for everyone and that's OK. But anyone who opts for it deserves instant "fashion forward" status.

Vial, who co-founded Salon Sloane in London and is Revlon-affiliated, confirmed in the caption that no extensions were used in this cut. "The idea was that it would look three-dimensional and aerodynamic," Vial told Bustle via phone. "It's a haircut within a haircut and a shape within a shape."

The client, named Liliana, wears her mullet with complete confidence. Given the oddness of the shape, self-assuredness was the only styling product she needed. And she had it in spades.

Yes, it's a lot of look and a major commitment. The eye is drawn to so many different elements of this 'grammable cut. The blunt, sharp edges look like severe, visible layers. The shape also limits styling options. Seriously, how do you toss this into messy bun atop your head on those lazy days when you don't feel like dealing with texturizing paste and a blow dryer?

Then again, it has such a cool and post-modern vibe. One can't help but think that whoever would get such a hairstyle can't be bothered with a pedestrian pony or a fussy updo.

"It's not meant to be commercial," Vial also told us. "It's meant to push the boundaries." He also explained that it was not an arbitrary decision and that they had to consider regrowth, shadows, and lines when slicing into the strands.

The internet was super opinionated regarding this unusual cut. No surprise there! But the lion's share of the comments were surprisingly positive.

Users were quick to herald Vial for his "next level" vision and execution.

Others could appreciate the mullet for its geometric shape while still questioning how anyone could actually pull this off. Put it in the proper perspective — it's just hair and it grows back. So why not have a little fun with a gloriously strange cut?

The majority of the reactions were from people impressed by this cut. They were expressing support for both the artist and his subject.

While the Vial-created space mullet is rad AF, it's not likely to become a "most requested" cut at salons globally. Remember, Scarlett Johansson rocked a mullet back in 2003. It was a sexy presentation and she slayed it. But she failed to ignite a mullet revolution and quickly moved on.

The always-trendsetting Zendaya brought it with a textured, extreme mullet at the 2016 Grammys. Of course the singer owned it. But the coif wasn't a keeper. It was merely a pitstop in Mulletville.

That said, the mullet does have its place in pop culture. It's usually the butt of many a joke. At least Vial and his client were adventurous and opted to play with the shape. They both went all in and you can't argue with the result. It might even inspire you to try something edgy next time you plop in your stylist's chair. Or not.

More like this
Why All The TikTok Beauty Girlies Are "Skin Flooding"
By Rachel Lapidos
The Best Beauty Looks Spotted At Paris Couture Week 2023
By Audrey Noble
Hailey Bieber's New Bob Is Short Haircut Goals
By Olivia Rose Rushing
This Week’s New Makeup Releases & More Beauty Headlines
By Audrey Noble and Erin Stovall
Get Even More From Bustle — Sign Up For The Newsletter
From hair trends to relationship advice, our daily newsletter has everything you need to sound like a person who’s on TikTok, even if you aren’t.