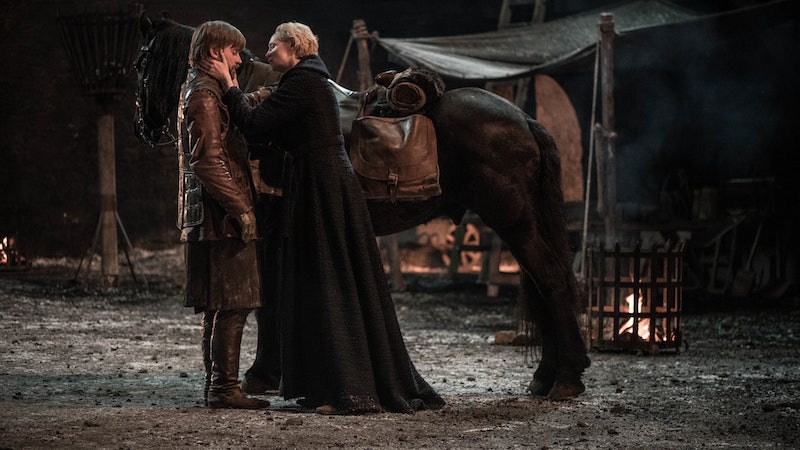 It's been two months since the Game of Thrones finale first aired, and fans still have quite a few questions about what happened and — more importantly — what could have happened after the fight for Westeros. Finally, we now have the answer to at least one question: at the show's panel at San Diego Comic Con, Game of Thrones star Nikolaj Coster-Waldau revealed whether Jaime and Brienne would have ended up together if he survived the Battle for King's Landing at the end of the series.

The cast of the fantasy saga reunited in Hall H on Friday, July 19 to talk about the controversial final season of Game of Thrones, and to finally address some of fans' most pressing questions. In particular, many fans wanted to know if Jaime and Brienne (Gwendoline Christie) would have been able to have a happy relationship, if only the late Kingslayer hadn't died in the Red Keep and had instead, returned to Winterfell and apologized. While Coster-Waldau did admit that Jaime and Brienne's romance was epic — "It would’ve been Brienne and Jaime forever," he said, according to IGN — the actor confessed that he couldn't see the knights living happily ever after.

"He’s got a lot of baggage, and I think she’d find out after a few weeks and go 'No I think I’m gonna have to move on,'" Coster-Waldau said, effectively breaking the hearts of Braime shippers everywhere.

To be fair, Jaime referenced that baggage himself in Season 8, when he told Brienne that he had to leave Winterfell and return to Cersei (Lena Headey) in King's Landing. "You think I'm a good man. I pushed a boy out of a tower window, crippled him for life, for Cersei," Jaime said. "I would have murdered every man, woman and child in Riverrun, for Cersei. She is hateful, and so am I."

The fact that Jaime was still so dedicated to his sister, despite all of the personal growth he made and all of the things he did for her, is part of the reason why Coster-Waldau also declared at the SDCC panel that Jaime's death was the "perfect" ending. "I thought it was a great ending. I thought it was perfect for him to end in the arms of Cersei. It made sense to me," he said.

While his declaration wasn't particularly popular with the audience in Hall H — Coster-Waldau was booed for his defense of Jaime's death, according to a tweet from Variety — the actor thinks that Brienne's final Game of Thrones moments were also a fitting way to wrap up their romance. "That’s just my opinion, but to me the scene with Gwendoline Christie when she fills in the blanks in the book was really beautiful," he told the crowd. "I think it showed her understanding of Jaime and her love of Jaime and I thought it was a beautiful scene."

Though Coster-Waldau might have felt that Jaime and Brienne's breakup and respective endings were fitting for the two strong-willed characters, at least fans can take comfort in the fact that the show's composer, Ramin Djawadi, left a Braime Easter Egg in the finale. In June, Djawdi confirmed the Game of Thrones fan theory that a version of Robb and Talisa's wedding song was playing while Brienne wrote Jaime's history in the White Book.

"It's just a hint of what their relationship — if they had stayed together, if he was still alive — what it could have been," the composer told INSIDER at the time. "What they could have become. That's why I put that in there."

Coster-Waldau may not believe that Jaime and Brienne would have gotten their perfect, happy ending, but it seems that at least one person working on the show does. At least fans can take comfort in the fact that Jaime and Brienne have their own wedding theme — even if they never actually got to ride off together into the sunset.