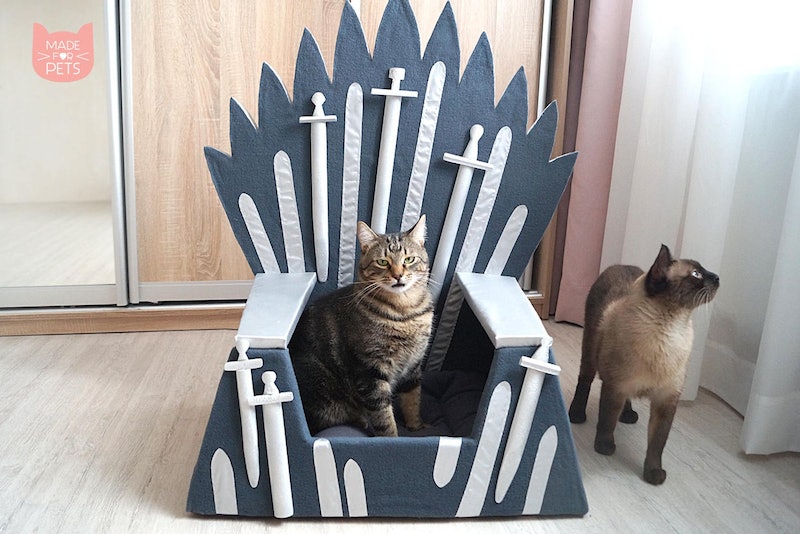 Cats are frequently portrayed as regal, yet cutthroat beings — and now, you can help your own cat fully embrace its true nature by gifting it a place to rest worthy of its station in life: An Iron Throne cat bed. Made by the Etsy shop MadeForPets, it’s the perfect pet accessory for any Game Of Thrones-loving household. Let’s just hope your cat doesn’t turn into Joffrey Baratheon or Aerys Targaryen when it seats its dainty little behind on it.

Based out of Kyiv, Ukraine, MadeForPets is run by Kate Agafonova, who brings a full decade of experience in graphic design, fashion, and web design to the table. She handmakes each item herself, so they’re not cheap; they are, however, pretty spectacular, so combined with the worldwide phenomenon status Game Of Thrones enjoys… well, let’s just say it’s not surprising that the Iron Throne cat bed has gone viral several times over. Indeed, this particular bed has been making the rounds for a few months now — some of the earliest coverage of it dates back to February — but now that we’re two episodes into the final season with four more to go, interest in the item has picked up once again.

Constructed out of foam rubber, upholstered with soft fabric, and featuring a cushion stuffed with a synthetic filler called sintepon, MadeForPet’s Iron Throne cat bed is a heck of a lot more comfortable than the actual Iron Throne is. (In the books, it’s repeatedly mentioned that those who rule from it have to do so carefully; it’s far from unusual to cut yourself on the thing, even if all you’re doing is sitting on it.) It measures 24 inches long, 17 inches wide, and 31 inches high and weighs about five pounds, making it suitable for a variety of small pets; however, the box-like construction of seat makes it ideal for cats. No one appreciates a good box quite as much as a cat does.

Caring for the bed is relatively easy, too; as a matter of fact, if the cushion gets messy, you can just toss it in a regular washing machine, according to the item listing. However, the rest of the bed is dry clean only, so bear that in mind, in case your cat has a hairball issue.

“Jon. Jon. What are you doing on my throne.”

Note, though, that even if you order your bed now, it won’t arrive in time for the Game Of Thrones series finale on May 19. (Sorry.) Understandably, estimated shipping times can take several weeks — and up to around two months in some cases, per the shop’s policies. For the United States, MadeForPets estimates around three to seven weeks plus processing time for each order; for the Iron Throne bed specifically, the current listed delivery date on the item page ranges from June 17 to July 9. Also know that sometimes, things shipping internationally can get held up at customs for a considerable amount of time (and, as the MadeForPets Etsy page notes, the shop isn’t responsible for “delays due to customs”). Shipping prices are also pretty steep; where I am in the Washington, DC area, the bed itself will cost $23 to ship, plus customs and import taxes.

Game Of Thrones not your speed? MadeForPets also offers a wide variety of other pet beds and houses. If your pet is a budding astronaut, give this NASA rocket ship a try. If you think they’d prefer living with all their friends on a Yellow Submarine, you can make that happen, too. Heck, you can even make it look like Pikachu ate your pet, if you’re, uh, into that.

What’s more, if you have no need of a pet bed, but could use, say, a shower cap for your furry friend…

…You’re golden. Also, I cannot get over the fact that this cat shower cap is shaped for a cat’s ears. It is hilarious and adorable. My cats would probably hate it. Ugh. So cute.

Anyway, to see more, check out MadeForPets on Etsy. You won’t regret it — even if you don’t have any pets to pamper yourself. The photos are cute enough to make you want to buy out the whole shop.