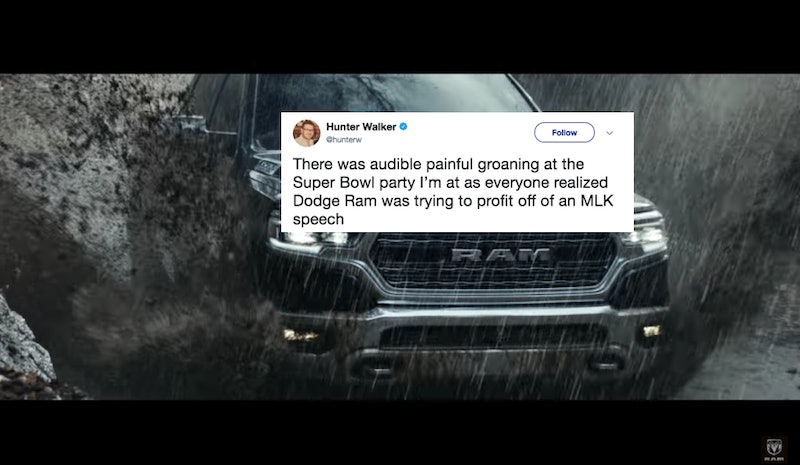 On. Feb., 4, 1968, Dr. Martin Luther King Jr. delivered his renowned "The Drum Major Instinct" speech. And 50 years later on Feb. 4, 2018, the Fiat Chrysler Automobiles company used excerpts from that speech in a Dodge Ram pickup trucks Super Bowl commercial. Twitter was furious that MLK had been coopted in such a way. And if its signature immediacy is any guide, the social media site indicates this ad did not go over well, to put it mildly.

The ad doesn't showcase many prominent shots of the Dodge Ram. Instead, there are a series of brief vignettes featuring a variety of people — diverse in age, ethnicity, and gender — engaged in a variety of admirable pursuits. There's an adult doing schoolwork online, a teacher, a nondescript football team running exercises, fishermen, men on horseback, a mom carrying her child, a soldier running onto a helicopter, and so on.

King's words play in the background as he proclaims that the new definition of greatness is to help others. "You don't have to know the theory of relativity to serve," King says. "You only need a heart full of grace, a soul generated by love."

On Twitter, some users found the ad perplexing, while others thought it disappointing. But many expressed anger and outrage at the joining of King's message with Dodge Ram salesmanship.

The full text of King's speech seems to make an especially strange pick for Fiat Chrysler Automobiles, considering King calls out Chrysler specifically as a brand people buy to make themselves seem important. "You've seen people riding around in Cadillacs and Chryslers who don't earn enough to have a good T-Model Ford," King says. "But it feeds a repressed ego."

The speech's title citing a "drum major instinct" refers to the ego King preaches against. In his view, it's a human desire to "be out front" that everyone has to battle. And when a person is losing that struggle against their ego, it shows up in a variety of destructive ways.

One of those ways, according to King, is through falling prey to advertisers who sell an idea of the good life. "The presence of this instinct explains why we are so often taken by advertisers... they have a way of saying things to you that kind of gets you into buying," King says, in the very same speech used by a car company to sell trucks. The irony therein is utterly on the nose.

But even without knowing the full transcript of King's speech, plenty of Twitter users caught onto the incongruity of King-plus-Dodge-Ram.

Many Twitters users questioned how such a problematic ad could make it through multiple levels of approval before airing on the most-watched program in America.

Still others pointed out that the NFL saw many of its players kneel during the national anthem over the course of the past season, first in protest of racial inequality and police brutality, and later in solidarity with the right of fellow players to do so. For many, participating in a peaceful public display for greater equality is part of King's legacy.

So the presence of King's words in an advertisement selling trucks felt especially tone deaf, at best, given the current moment.

Controversy over Super Bowl commercials is nothing new. Some companies and organizations are purposefully provocative in order to spark buzz about their message, though it doesn't seem to be a motivator in the Dodge Ram commercial.

Either way, the car company generated all kinds of bad press for itself on Twitter by hijacking MLK for its truck selling purposes.