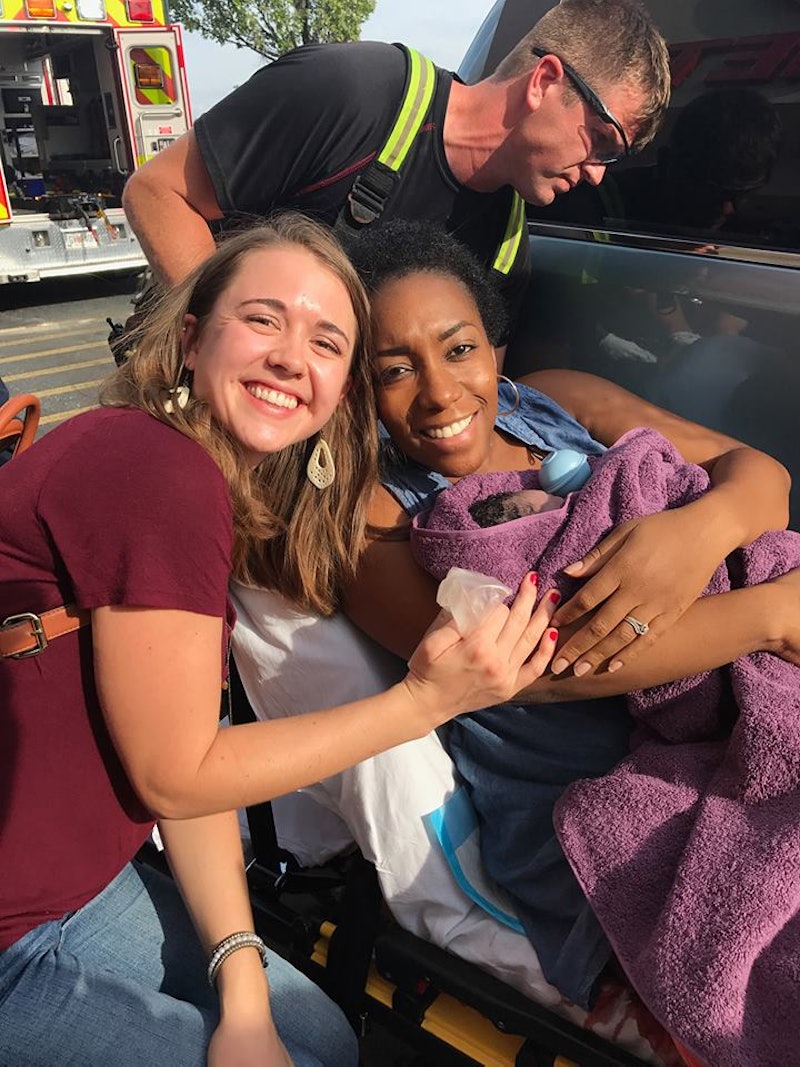 What is the most exciting thing that has happened to you in a Target? For me, it was the time I found the perfect white t-shirt — one that was loose but not boxy, and not so sheer that you could see my bra. For a long time, I thought that was the most exciting thing that had happened to anyone in any Target, or any store ever (good white t-shirts are extremely hard to find!) until yesterday, when I heard about Tanya St. Preux, who gave birth in a Target parking lot outside of Atlanta.

St. Preux had stopped at the store with a friend to pick up a few items, when she began experiencing strong contractions. Caris Lockwood, a labor and delivery nurse at the Piedmont Atlanta Hospital was also in the store, shopping with her mom and sister. When her mom called her over to talk to St. Preux, Lockwood was initially embarrassed.

"I thought she was just wanting me to say hi because I'm a nurse, and I'm thinking, 'Mom, just let this woman shop in peace,' " Lockwood told Atlanta's FOX 5.

When it became clear that St. Preux was about to deliver, her friend ran outside to grab the car, and Lockwood and her mother began to help her to the parking lot.

"Her contractions and pain were increasing as we walked with her to the car," Lockwood's mother, Lisa Bozeman said. "Just when we got outside the store her water broke."

At that point, Lockwood sent her sister inside the store to collect sterile gloves and towels. Shortly after that, with the help of several Target employees, and just 20 minutes after the two women first met, Lockwood delivered St. Preux's baby, a 7 lb., 10 oz. boy named Maleek.

"The next minute God provided an ER nurse who stopped to assist," Bozeman said. "Then, shortly after that a NICU nurse came by and offered to help. Thankfully, she was not needed."

Paramedics arrived on the scene shortly after Maleek was delivered, and allowed Lockwood to cut the umbilical cord.

"It was the first time I delivered a baby standing up, and outside, and not at a hospital — and with a crowd," St. Preux said.

In a statement to CNN, Target spokeswoman Jenna Reck said: "We commend the nurses and medical staff, as well as the Target team members, who jumped in to help a woman who delivered a baby in a Target store in Georgia. We're happy to hear that the mother and baby are doing well and wish them all the best."

While it certainly makes for quite the story, a Target parking lot is not the most unusual place a woman has given birth. In a similar case to St. Preux's, Chastity Davis, then 19, gave birth to her child outside a Sears in 2010. In 2012, a woman in Tacoma, Washington ended up giving birth in an elevator. And in 2014, a woman gave birth on a Southwest Airlines flight from San Francisco to Arizona. After the baby was born, the umbilical cord was cut with a pair of beauty scissors that another passenger had snuck past TSA.

Fortunately for St. Preux, Lockwood was there to help with her sudden delivery.

"We feel so blessed to have been part of this," Bozeman said. "We have visited the family at the hospital and their home, and plan to have a lifetime of friendship with them. We love that they are calling us family!"

Although Target has not indicated that they plan to do so, it seems like both families deserve some sort of lifetime discount. Then they can buy all the perfect white t-shirts they want.