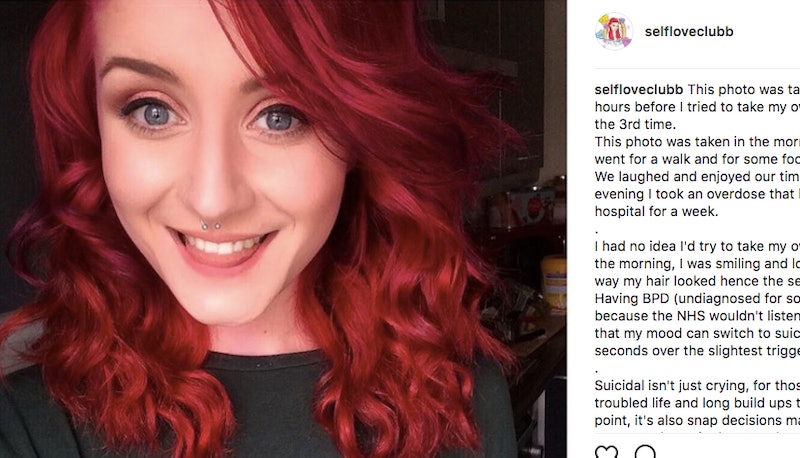 The face of mental health issues takes many forms. Simply put, there is no “right way” to appear depressed. The notion that someone doesn’t outwardly “look suicidal” isn’t just incorrect; it’s invalidating and harmful. One woman is working to combat these misconceptions, fighting mental health stigma with a selfie from the day of her suicide attempt.

Milly Smith, on Instagram @selfloveclubb, is a blogger advocating for mental health and self-acceptance. She promotes body positivity and speaks openly about her own mental health issues on Facebook and YouTube as well. Smith has previously written about living with borderline personality disorder (BPD), a condition marked by severe mood instability which makes it difficult to regulate emotions. She’s also experienced suicidal thoughts in tangent with her BPD.

Last week, Smith posted a selfie on Instagram. In it, she’s smiling, her hair and makeup are done up, and she appears, at least superficially, happy. The text overlaid on the selfie reads, “Taken seven hours before I attempted suicide.” Smith shares a story from that day in the full Instagram post, highlighting how mental health stigmatization often silences conversations by implying you need to look a certain way in order to need help.

Smith’s selfie has been liked over 12,000 times, further emphasizing the need for more open conversations about mental health. People have commented on her post over 500 times, sharing support, gratitude, and their own stories about struggling with mental health conditions.

“This photo was taken just 7 hours before I tried to take my own life for the 3rd time. This photo was taken in the morning, we went for a walk and for some food with Eli. We laughed and enjoyed our time. That evening I took an overdose that left me in hospital for a week. . I had no idea I'd try to take my own life in the morning, I was smiling and loved the way my hair looked hence the selfie. Having BPD (undiagnosed for so long because the NHS wouldn't listen) means that my mood can switch to suicidal in seconds over the slightest trigger. . Suicidal isn't just crying, for those with a troubled life and long build ups to breaking point, it's also snap decisions made whilst your son sleeps in the same house and your loving partner kissed you goodnight hours before. . We need to learn how suicidal tendencies can present themselves beyond our ignorance to the topic. By listening and learning even the tiniest triggers/signs we can save lives.”

In a previous post on Instagram, Smith shared a story about how damaging disbelief can be after a doctor told her she didn’t “look suicidal.” “I remember these words coming from the Dr's mouth right after I'd just told him that I was having thoughts of suicide,” Smith wrote. “I remember in that moment my 14 year old self felt invalidation, dumb and embarrassed; something no one in that mindset should have to feel.” Smith concludes the post, which has since been liked over 23,000 times, writing “This is the danger of thinking mental health has a ‘face’, a ‘look’. This is how stigma, ignorance and judgement towards mental health/suicide affects those who are poorly.”

Talinda Bennington, wife of late Linkin Park frontman Chester Bennington, recently shared a smiling photo of their family which was taken a few days before Chester’s death. “Suicidal thoughts were there,” Bennington wrote in her tweet, “but you’d. Never [know].”

One of the ways to fight mental health stigma is to have more open, informed conversations about it. Understanding that appearance isn’t the only indicator of mental illness is quite literally life-saving. “There isn’t a look per se,” Dr. David A. Brent, professor of psychiatry at the University of Pittsburgh, told TODAY, “There are lots of people who feel a lot worse than they appear.”

“I wanted to break the stigma,” Smith said in an interview with TODAY. “Suicidal tendencies are still such a taboo and I wanted people to know they can talk about it, that it’s not to be ashamed of and they’re not alone.” Placing value on mental health as a culture requires conversation. Thanks to people like Smith who are speaking up, we’re getting there together.

If you are struggling with suicidal thoughts, know that you are not alone, you matter, and there is help. The National Suicide Prevention Lifeline provides free and confidential support 24/7. The Trevor Project has 24/7 chat and phone support specializing in helping young people who are LGBTQIA+. The Trans Lifeline is a phone resource staffed by transgender people for transgender people who need support.