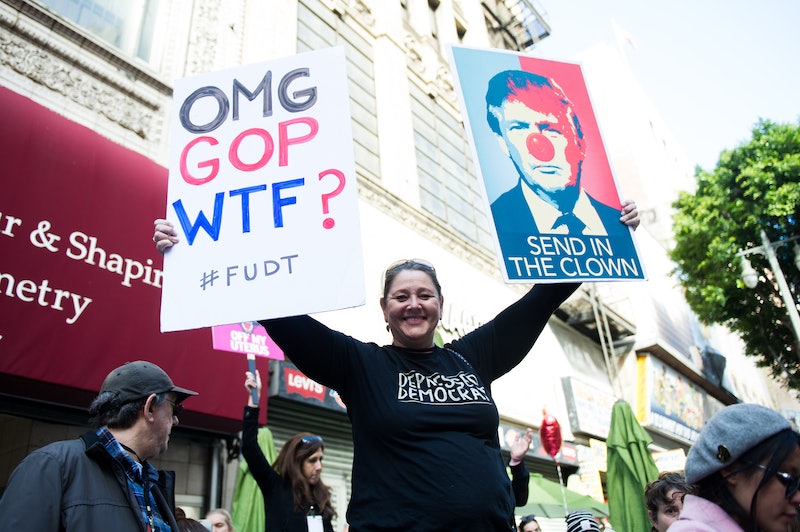 For better and for worse, social media poses an undeniable political force — and that has, arguably, never been clearer than after this election. It's the Twitter megaphone of Donald Trump, but it's also the Facebook group that launched the Women's March. And while we wake up to bombastic tweets from the president, we've also seen the power of social media to organize the masses.

Teresa Shook knows the positive power of social media firsthand. The Hawaii resident made a Facebook post the night of Trump's election expressing her intentions to march. That post grew into the Women's March on Washington, which had several counterparts across the world. The marches drew between 3,267,134 and 5,246,670 people in the United States alone, according to Profs. Erica Chenoweth and Jeremy Pressman writing in the Washington Post.

Mrinalini Chakraborty, a state co-coordinator for the Women's March on Washington, tells Bustle how social media has been essential to organizational efforts. She helps curate and oversee the Facebook group for the Chicago chapter of the Women's March, as well as a handful of the other state groups.

"In general, the role that Facebook has played is huge," she says. "It’s been a key tool to mobilize folks very quickly. If you start an event, and you can get a few organizations that have a reasonable Facebook presence — we’ve been able to turn out hundreds of people in just a couple hours because of the strength of Facebook."

When it comes to the insider logistics, Chakrabortyi shares that organizers prefer more secured online tools, but Facebook is the end-all for spreading the word on well-made plans. "On the inside, the core network of national and state organizers use tools, like Basecamp for project management. We use Slack for secure communications," she says. "But once an event is decided on and the details are fleshed out, Facebook is the idea way to disseminate the information."

One of the useful and versatile aspects of the Facebook format is the ability for political organizers to create spaces for politically like-minded people to connect and support each other off the internet, as well, says Chakraborty. The Facebook groups themselves have not only spread the word about protests, but help energize people in their own communities.

"It's a place to moderate comments and answer people’s questions, but also, it’s more of a public forum for people to share ideas and support," Chakraborty explains. "It’s not very heavily moderated for a specific reason, people are supposed to feel comfortable sharing ideas."

Beyond Facebook's ability to quickly draw crowds to events while connecting budding (and veteran) activists to actions in their communities, Chakraborty also shares that the format of official Facebook pages has provided a streamlined tool for curating news about grassroots activism, often sharing stories that she believes the mainstream media misses.

"If you go to the Women’s March of Illinois page, it features a lot of very curated content. My team and I decide what goes up there. The national page is also extremely monitored by the Women’s March admins. All of the pages are run by folks who are organizing the Left at the moment," Chakraborty says. "The mainstream media obviously has a Facebook presence, but I personally think smaller organizing groups are coming out with some really valuable information."

While lots of different social movements are using Facebook to publicize events and galvanize the masses, the Women's March may have been the ultimate example of its power.