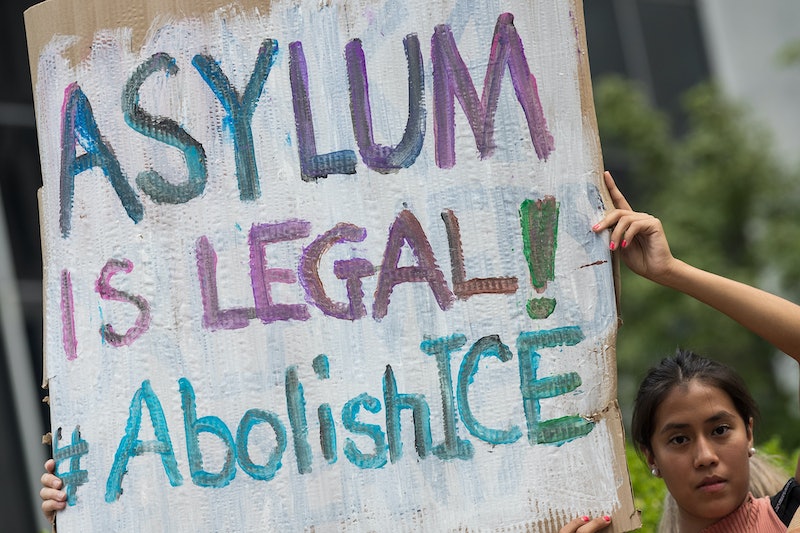 On Friday afternoon, the Supreme Court ruled that President Trump cannot stop asylum claims from migrants at the U.S-Mexico border, according to various reports, and upheld a lower court's temporary stay against the policy. The administration is attempting to implement a policy that would effectively block nearly all migrants at the border from making formal asylum claims in the U.S., but in a narrow 5-4 ruling, the high court ruled that this policy can't take effect until it's fully litigated in court.

The 9th Circuit Court of Appeals had blocked Trump's asylum ban earlier in the month, ruling that it "irreconcilably conflicts" with existing immigration law and the "expressed intent of Congress." The Trump administration had appealed to the Supreme Court to overturn the 9th Circuit's ruling.

Trump's two appointees to the court, Brett Kavanaugh and Neil Gorsuch, voted to lift the 9th Circuit's restraining order. However, Chief Justice John Roberts sided with the court's liberal bloc, and together, they determined that the 9th Circuit's ruling will stay in effect while the broader legal case against the asylum ban plays out in court. Neither side offered an explanation for their decisions in the one-page ruling issued Friday afternoon.

The policy in question, which the Justice Department announced in November, would have used several mechanisms to drastically restrict the number of migrants who are eligible for asylum claims. Under the current system, immigrants who enter the United States without proper documentation have the option of claiming asylum, regardless of how or where they entered the country. The Trump administration's plan would make this option unavailable to migrants who cross the border illegally, and only allow immigrants to make asylum claims if they enter the country through official ports of entry.

However, many migrants are flatly turned away by immigration officials at ports of entry; if the Trump administration's plan were to take effect, such migrants would have no legal way to apply for asylum, regardless of the merits of their claims. Instead, they'd have to apply for a lesser form of protection called "withholding of removal," which is much harder to obtain and, unlike asylum, doesn't offer a path to permanent legal status in the United States.

The policy drew immediate criticism from civil rights groups when it was announced, with Lee Gelernt, deputy director of the ACLU's Immigrants' Rights Project, telling NBC News at the time that it's "patently unlawful" to block migrants from seeking asylum based on where they enter the U.S. from. Likewise, the ACLU celebrated Friday's ruling, writing on Twitter that it "will save lives."

Roberts' decision to side with the court's liberals to block the Trump policy was notable — and not just because Roberts was appointed to the court by George W. Bush. After the 9th Circuit initially stayed the policy, Trump grumbled that it was an "Obama judge" who'd written the ruling; this prompted an extremely rare rebuke from Roberts, who said that "we do not have Obama judges or Trump judges, Bush judges or Clinton judges."

"What we have is an extraordinary group of dedicated judges doing their level best to do equal right to those appearing before them," Roberts told the Associated Press, adding that an "independent judiciary is something we should all be thankful for." Trump shot back on Twitter, writing "Sorry Chief Justice John Roberts, but you do indeed have 'Obama judges.'"