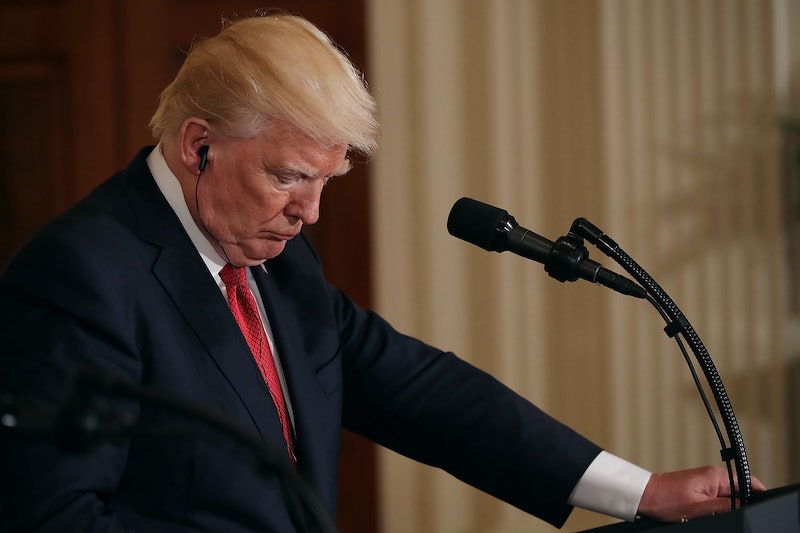 Maybe it's the jetlag. Maybe it's navigating all of the complex and unfamiliar social norms. Maybe it's just that feeling you get when you can't sleep in your own bed. Whatever it is, Trump is already exhausted on his first trip abroad. Maybe that sounds like you after a few days of traveling, but you're not the president of the United States.

This exhausted president is the lifelong businessman, the one who painted primary opponent Jeb Bush as a "low-energy" candidate, who questioned Hillary Clinton's stamina and attacked her health in an ad. Now he's three days into his very first trip abroad, and he's reportedly already making excuses about how tired he is.

This is hardly the most shocking report to come out of Trump's presidency, as hypocrisy seems to be second nature to him. He attacks someone for something, like all of his talk about Obama and golfing, and then proceeds to golf far more often than Obama ever did. He attacks Clinton for a perceived lack of stamina, then bows out of an event in the first country of his first trip abroad because he was tired, sending his daughter instead. Clinton, in case you forgot, travelled endlessly as Secretary of State — having visited 112 countries during her tenure.

But as you've no doubt learned by now, President Trump doesn't play by the same rules as politicians have before him. He's allowed to golf almost every weekend without facing questions about it. He's allowed to send Ivanka to represent him because he was tired. It's totally fine if he says "Islamic extremism" instead of "Islamist extremism," departing from his planned speech, and then has a White House official explain that the gaffe happened because he was "just an exhausted guy."

There's actually a difference between Islam and Islamism: Islam is the religion, and Islamism is an illiberal political ideology that claims to speak for all adherents to Islam. It might seem like a small distinction, but it's important when you're the president and you're giving a speech to Muslim leaders from all over the world.

It's also important that the top figure of American diplomacy is refusing to take part in events and making avoidable gaffes after only his first transatlantic flight. I'm never one to hold back from canceling events due to jetlag, but the fate of nations doesn't rest on my shoulders.

As if there wasn't enough proof already, Trump clearly doesn't take the position of president seriously enough — and apparently, he's entirely OK with the whole world knowing that.