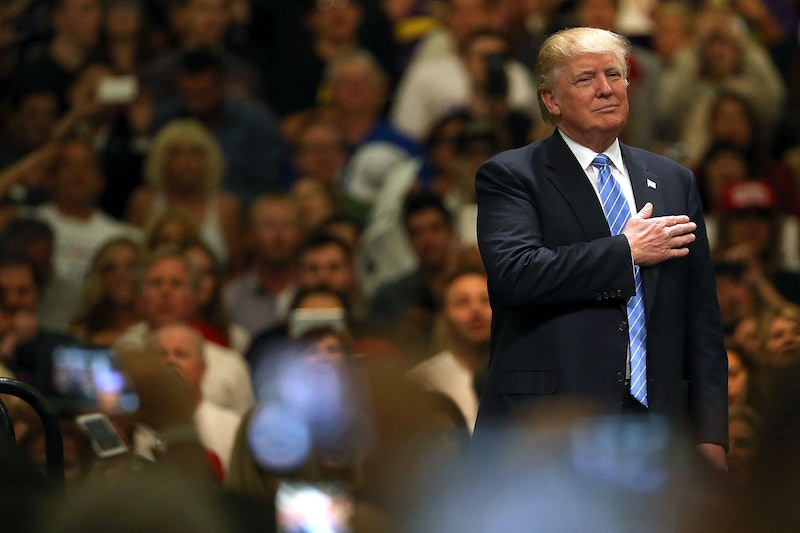 There's no doubt Trump allegedly sharing allied secrets with Russia was a big mistake. At his meeting with the Russian Foreign Minister Sergey Lavrov and Russian Ambassador Sergey Kislyak last week, Trump reportedly explained what U.S. intelligence knows about an ISIS plot to plant laptop bombs on planes. The problem is that this information was supposedly so delicate that it hadn't even been shared with other allies. But that didn't stop Trump. Now, technically, this is not illegal, but there are a group of national security experts who think Trump could have broken his presidential oath by disclosing the classified info.

This is the strongest criticism to come out against Trump in the fallout of these revelations, and there's been a fair share of criticism from members of Congress and former and current national security officials. The national security experts making the oath argument have their own blog called Lawfare, and they published a reaction when the story first broke in the Washington Post. It's a pretty rough critique:

If the President gave this information away through carelessness or neglect, he has arguably breached his oath of office. ... In taking the oath President Trump swore to “faithfully execute the Office of President of the United States” and to “preserve, protect and defend the Constitution of the United States” to the best of his ability. It’s very hard to argue that carelessly giving away highly sensitive material to an adversary foreign power constitutes a faithful execution of the office of President.

Thus, following this line of argument, the reason behind the disclosure to Russia matters greatly. Getting insight into that matter will be difficult, though, as the White House has denied the incident happened at all, at least as reported.

H.R. McMaster, Trump's national security adviser, denied Trump shared "intelligence sources or methods" with the Russians. "The story that came out tonight as reported is false," he told reporters at the White House. "At no time were intelligence sources or methods discussed. The president did not disclose any military operations that were not already publicly known. ... I was in the room. It didn't happen."

But if Trump did share things he shouldn't have, this is a very serious problem. As the Lawfare experts go on to explain, "Violating the oath of office does not require violating a criminal statute. If the President decided to write the nuclear codes on a sticky note on his desk and then took a photo of it and tweeted it, he would not technically have violated any criminal law — just as he hasn’t here."

The idea that he could make other mistakes that are even more dangerous to the American people than breaking the law should worry everyone. In the original story in the Post, a source alleged that Trump "revealed more information to the Russian ambassador than we have shared with our own allies." Again, the White House denies the report.

Even so, that doesn't instill much confidence. Unfortunately, only Congress can do something about this, and Republicans look unlikely to act.