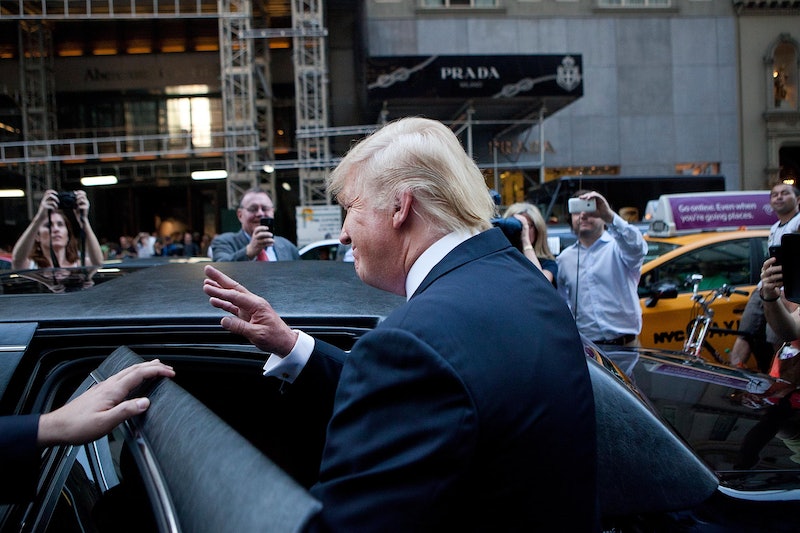 POTUS might be based in DC for now, but he'll always be a New Yorker at heart. In a recent interview with The New York Post, Trump said he misses New York City a lot, but that he avoids the city for the most part. The reason why Trump doesn't come around his old stomping grounds is, according to his account, because he would feel "guilty" disrupting the city with a visit. So instead, when he comes to the area, he stays in the next best option: New Jersey.

Trump said, "I love New York, I miss New York ... [but] they close down the city. I feel guilty because I remember when Obama would come in I’d say what the hell is he coming. He’d come in. The traffic. With me it’s even worse. They close down an even bigger section. So that’s the reason I do that."

He added, "A lot of times I stay in New Jersey at the club because it’s 2,000 acres. And they have plenty of room. I stay there not because of any reason other than I feel so guilty when I go into New York."

Trump further confirmed that he plans to return to New York as soon as he's done with the presidency. But there's one part of his old routine that he won't return to.

Trump said there's no way he would return to reality television following the presidency. Specifically, that he won't relaunch The Apprentice. “No. No. Arnold [Schwarzenegger] put that out of business,” he said.

Trump further used The Apprentice as an explanation for why he thinks he isn't going to be awarded a Nobel Peace Prize for his work with North Korea. He said, “Well, they’ll never give it to me. We should have gotten the Emmy for The Apprentice, you know? I had the No. 1 show, The Apprentice. Arnold Schwarzenegger blew it. Big movie star. It was dead in two nights. I had it for 14 seasons.”

The president then continued to lament The Apprentice's lack of Emmy awards, pointing out the two years in 2004 and 2005 that The Amazing Race beat it out. He said, “So they’re saying he’s done a magnificent job, this show has gone to the top of the heap … and the winner is, and I stood up … and they said Amazing Race and I said, ‘You’ve got to be kidding?’ That show was terrible. Amazing Race got it because Amazing Race was the establishment.”

According to Politico, Trump had a reputation for being a bit of a "homebody" in the years leading up to the presidency. He would often return to Manhattan in between stops on the campaign trail to sleep in his own bed in Trump Tower. Since becoming president, though, Politico reports that Trump has only returned to New York City a "handful of times," and that most of those times were for United Nations general assemblies (United Nations headquarters are in the city).

On the other hand, Trump has made over 70 trips to his golf course in Bedminster, New Jersey.