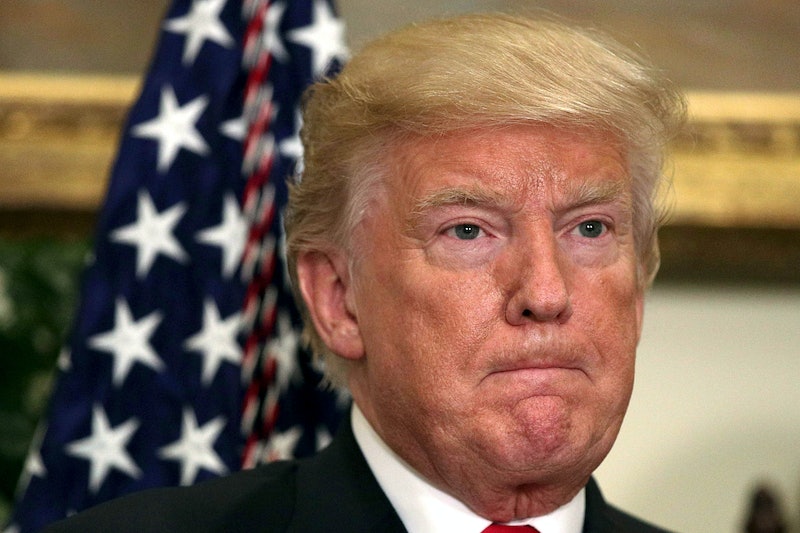 On Thursday, The Washington Post reported that President Trump is looking into how presidential pardons work with the help of his lawyers. On Saturday morning, in a series of irritated tweets on various topics — including his stalled health care bill, Hillary Clinton's emails, and his new communications director Anthony Scaramucci — Trump reassured Twitter he had "complete power to pardon," effectively confirming the Post's report that he was looking into the extent of his pardoning authority

"While all agree the U. S. President has the complete power to pardon, why think of that when only crime so far is LEAKS against us. FAKE NEWS," Trump tweeted, again reverting focus to the barrage of leaks coming from the White House.

The Trump administration's interest in pardons comes as the Russia scandal involving the president, his family members, and his surrogates heats up. On July 11, Donald Trump Jr. released an email chain including messages setting up a meeting with Natalia Veselnitskaya, a Russian lawyer with Kremlin connections who Trump Jr. believed could offer him incriminating information on Hillary Clinton. One email from publicist Rob Goldstone included a particularly damning sentence that seemed to confirm the Russian government's meddling in the 2016 election — "This is obviously very high level and sensitive information but is part of Russia and its government's support for Mr. Trump."

Jared Kushner, the president's son-in-law, was present during the meeting with Veselnitskaya and is also entangled in the web of Russian scandal. In December 2016, he met with Sergey Gorkov, a man who was selected by Putin to run Vnesheconombank (VEB), a bank-like entity which Business Insider mentions is "often compared to a slush fund for Russian President Vladimir Putin."

On Friday, the Post published a report revealing that Sergey Kislyak, the Russian Ambassador to the United States, informed his Moscow-based superiors that he spoke with Attorney General Jeff Sessions about matters pertaining to the 2016 election while the presidential race was still in full swing. This directly contradicts Sessions' claims that his meetings with the Russian ambassador were not campaign related, a statement he made after initially opting to not disclose his contact with Kislyak.

While he can pardon others, the question of whether President Trump can legally pardon himself is unclear, given the Constitution's broad language regarding the matter. Earlier this month, former Congresswoman Elizabeth Holtz argued that presidents do not possess the power to self-pardon, citing James Madison's statement that “No man is allowed to be a judge in his own cause.” A president pardoning himself, she insisted, would be doing just that.