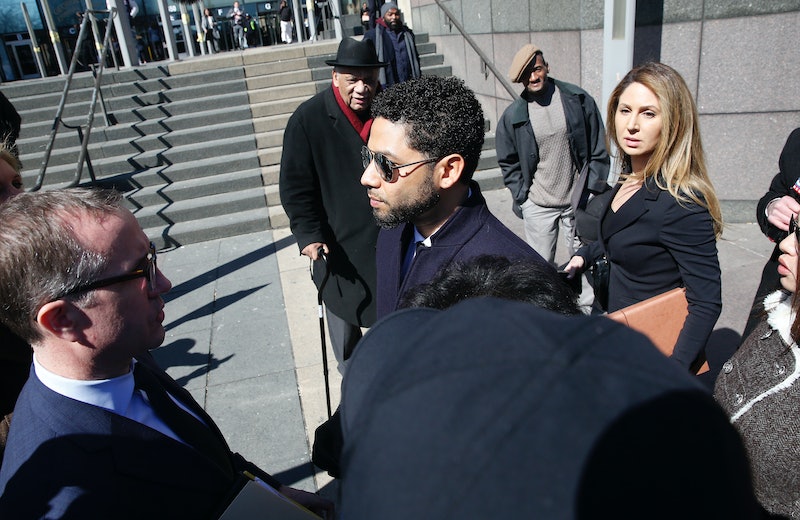 The controversy surrounding an alleged hate crime against the Empire star appeared to be coming to an end on Monday, when his lawyers announced that the charges against him had been dropped. However, on Thursday it became clear that wasn't entirely true. President Donald Trump announced investigations into the Jussie Smollet case from the FBI and the Department of Justice in an early morning tweet.

"FBI & DOJ to review the outrageous Jussie Smollett case in Chicago," Trump tweeted Thursday. "It is an embarrassment to our Nation!" Bustle has reached out to the FBI and the DOJ for confirmation.

In late January, Smollett claimed he had been the victim of a hate crime in downtown Chicago. He said that two masked attackers had shouted homophobic slurs, poured an "unknown chemical substance" over him, thrown a noose around his neck, and then run away. The news triggered an outpouring of sympathy and a national discussion about hate crimes in the United States.

The next month, Smollett turned himself into Chicago police, facing disorderly conduct charges for allegedly having lied about being attacked. The Chicago police claimed the actor had "orchestrated" the attack as a "publicity stunt." But on Monday, the Cook County State’s Attorney’s Office dropped all charges against Smollett.

In a statement provided to Bustle, the Cook County State's Attorney's Office said that Smollett's hours of community service and the $10,000 in bond money that he forfeited were an "appropriate resolution to the case." While Smollett's lawyers implied in their public statements that this essentially communicated Smollett's innocence, prosecutors responded by saying that clearing Smollett's charges wasn't an exoneration.

"We believe he did what he was charged with doing," First Assistant State's Attorney Joe Magats told Chicago ABC affiliate WLS. "This was not an exoneration. To say he was exonerated by us or anyone else is not true."

Smollett also appeared in front of the media, thanking his supporters for their support throughout the process.

"I want you to know that not for a moment was it in vain," Smollett said. "I've been truthful and consistent on every single level since day one. I would not be my mother's son if I was capable of one drop of what I've been accused of."

The prosecutors' decision to drop the charges drew criticism from many angles, with Chicago's Democratic mayor, Rahm Emmanuel, calling it a "whitewash of justice." A spokesperson for the Chicago Fraternal Order of Police expressed "outrage" on behalf of the organization, while also calling for a federal investigation into the matter, according to NBC News.

"It’s Mr. Smollett who committed this hoax," Emmanuel said, per NBC. "He’s still saying he's innocent, still running down the Chicago Police Department. How dare he? How dare he?"

So Trump's declaration didn't come out of nowhere. The DOJ and the FBI, however, have not yet confirmed that the investigation will indeed begin. And the tweet about Smollett is only one of seven — all on different subjects — that Trump posted Thursday morning.