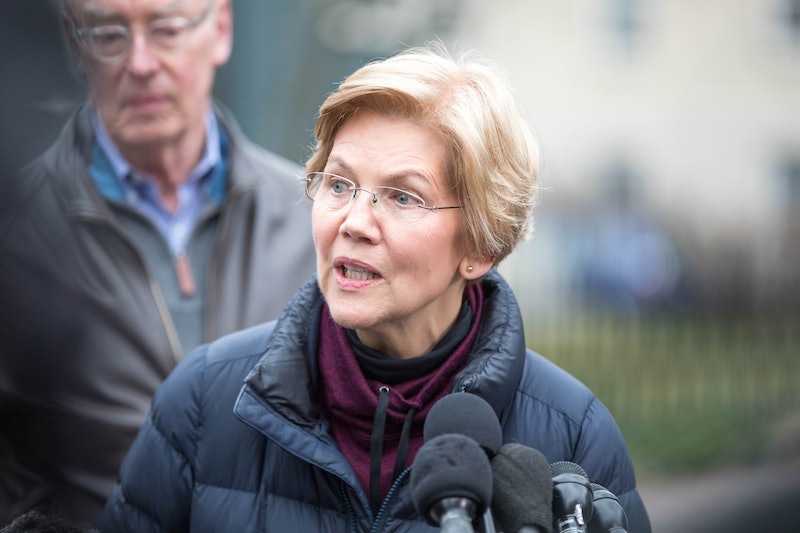 On the last day of 2018, Trump responded to Elizabeth Warren's 2020 exploratory committee announcement by saying he'd like for her to run — but that doesn't mean his message was friendly. The president's words came shortly after the Massachusetts senator announced she'd be taking the necessary legal first step for any presidential candidate.

The New York Times' Maggie Haberman tweeted a partial transcript of Trump's conversation with Fox News host Pete Hegseth, adding a caption that read, "If more evidence was needed that branding Jeb 'low-energy' is going to look quaint once 2020 gets started, here ya go"

Elizabeth Warren will be the first. She did very badly in proving that she was of Indian heritage. That didn't work out too well. I think you have more than she does, and maybe I do too and I have nothing. So, we'll see how she does, I wish her well, I hope she does well, I'd love to run against her.

Then, when asked whether he believed Warren could win if she ran for president, Trump replied, "Well, that I don't know, you'd have to ask her psychiatrist."

To be clear, Warren has not confirmed that she's running for president yet. Rather, it's a first-step indication that she's very likely to run. As CBS News reports, Warren will now begin traveling to the early-voting primary and early caucus states, and her exploratory committee will allow her to raise money to travel to these states and hire staff around these efforts.

In her video released on Monday, Warren said in part, "In our country if you work hard and play by the rules, you ought to be able to take care of yourself and the people you love. That's a fundamental promise of America."

If Warren does become the Democratic candidate for president, she and Trump will certainly have a long history leading up to their direct contention. POTUS has long challenged Warren's claims of Native American ancestry, repeatedly calling her "Pocahontas." In October, Trump tweeted,

Pocahontas (the bad version), sometimes referred to as Elizabeth Warren, is getting slammed. She took a bogus DNA test and it showed that she may be 1/1024, far less than the average American. Now Cherokee Nation denies her, “DNA test is useless.” Even they don’t want her. Phony!

In contrast, Warren has called Trump an "insecure money grubber" running on a platform of "racism, sexism and xenophobia" in the past, per ABC.

Later on Monday evening, Warren launched an Instagram livestream where she cracked a beer open and took questions from followers, per Fox News. Per the publication, Warren said, "I'm here in my kitchen, uh, and um, I thought maybe we'd just take some questions and I'd see what I can do."

If she does end up running head-to-head against Trump, 2020 will surely be an election year to remember.