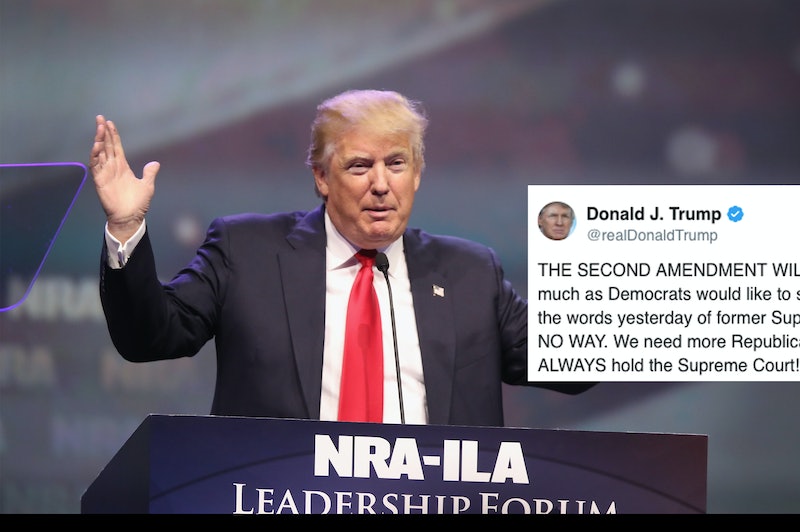 On Tuesday, former Supreme Court Justice John Paul Stevens published a New York Times op-ed calling for a repeal of the Second Amendment. Stevens argued that such a repeal would make schools safer and said the amendment is long-outdated. On Wednesday morning, seemingly in response, Donald Trump tweeted the Second Amendment wouldn't be repealed.

"THE SECOND AMENDMENT WILL NEVER BE REPEALED!" Trump wrote on Twitter. "As much as Democrats would like to see this happen, and despite the words yesterday of former Supreme Court Justice Stevens, NO WAY. We need more Republicans in 2018 and must ALWAYS hold the Supreme Court!"

Contrary to Trump's suggestion that a Second Amendment repeal is merely a Democratic ploy, Stevens — who was appointed by a Republican president — argued in his op-ed that there is a longstanding legal precedent for such a repeal. According to Stevens, who served as an associate justice on the Supreme Court from 1975 to 2010, the Second Amendment was never meant to prevent or limit federal or state implementation of gun control legislation. And indeed, Stevens argued, it was only in 2008 — in the case of District of Columbia v. Heller — that the Supreme Court ruled that there is an individual right to bear arms.

Trump's tweet followed days of silence on the subject of guns and gun control, even as hundreds of thousands of people rallied in D.C. and all around the world for the March for our Lives over the weekend. The March for our Lives was organized by survivors of the school shooting in Parkland, Florida, last month, alongside advocates for stricter gun control legislations. In his op-ed, Stevens lauded students for their "civic engagement," and encouraged them to go one step further by calling for the repeal of the Second Amendment.

Repealing the amendment is not necessarily a new idea, and it's a discussion that frequently arises in the U.S. following a mass shooting. In June 2016, shortly after a gunman killed 49 people at the Pulse nightclub in Orlando, Florida, David S. Cohen, a Drexel University constitutional law professor, argued in Rolling Stone that "there is absolutely nothing permanently sacrosanct about the Founders and the Constitution." Cohen reminded his readers that the Constitution once described slaves as 3/5 of a person, and didn't allow most minority groups to vote.

"The Second Amendment needs to be repealed because it is outdated, a threat to liberty and a suicide pact," Cohen wrote at the time.

Ahead of Trump's Wednesday morning tweet, a reporter asked White House Press Secretary Sarah Huckabee Sanders if the Trump administration saw a Second Amendment repeal as a possibility given the "current political climate." Sanders responded by reaffirming the Trump administration's position on the Second Amendment, as she did following the mass shooting in Las Vegas.

"The president and the administration still fully support the Second Amendment," Sanders said on Tuesday. "We think that the focus has to remain on removing weapons from dangerous individuals, not on blocking all Americans from their constitutional rights."

Trump is evidently certain that the Second Amendment will not be repealed, but that begs the question — what would it take to repeal it? There are two main ways that the Second Amendment could be repealed: Either the House and Senate would have to draft a new amendment and send it to the states for ratification, or two-thirds of state legislatures would have to call for a constitutional convention to propose a new amendment. Only once in American history has an amendment been repealed — when the 21st Amendment repealed the 18th Amendment and brought Prohibition to an end.