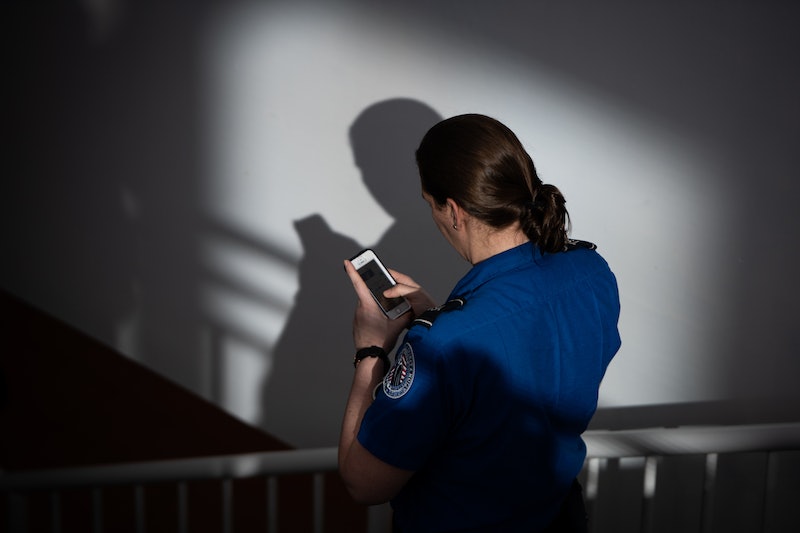 You probably dread going through airport security when you're running late for an early morning flight, but the Transportation Security Administration's (TSA) Instagram account is a whole different story. From hilarious photos of what not to bring on a plane to snapshots of dogs, its posts have attracted 1 million Instagram followers. That being said, don't expect to see that content on TikTok. On Feb. 23, TSA banned employees from posting videos to TikTok due to security concerns.

Though TikTok has yet to comment on the ban, the company did release a statement in November 2019 after Democratic New York Sen. Chuck Schumer and Republican Arkansas Sen. Tom Cotton asked intelligence officials to investigate the app. In a Nov. 5, 2019 press release, TikTok U.S. General Manager Vanessa Pappas said all U.S. user data is stored within the United States, with backup data stored in Singapore. "TikTok’s data centers are located entirely outside of China," Pappas wrote. "Further, we have a dedicated technical team focused on adhering to robust cybersecurity policies, and data privacy and security practices." At the time, a spokesperson added to Reuters, “TikTok is committed to being a trusted and responsible corporate citizen in the U.S., which includes working with Congress and all relevant regulatory agencies." Bustle has reached out to TikTok for comment on the recent TSA ban.

The TSA TikTok ban came after Schumer sent a letter to TSA Administrator David Pekoske stating concerns that the app was a security risk. The senator referenced the Department of Homeland Security's (DHS) already-existing TikTok ban in January as an example that the TSA should follow.

"While I recognize that the TSA must adapt its outreach techniques in order to communicate with a variety of Americans, I urge you to assess the potential national security risks posed by China-owned technology companies before choosing to utilize certain platforms," Schumer wrote. He said that members of U.S. federal agencies could risk exposing "user content and communications, IP addresses, location-related data, metadata, and other sensitive personal information" because the app falls under the jurisdiction of Chinese laws.

“TSA has never published any content to TikTok nor has it ever directed viewers to TikTok,” a TSA spokesperson told The Verge on Monday. “A small number of TSA employees have previously used TikTok on their personal devices to create videos for use in TSA’s social media outreach, but that practice has since been discontinued.” There are a few instances where the TSA's official Twitter account posted videos of its employee's TikTok videos.

The agency uses its different social media platforms to post tips about what you can and cannot bring onto flights, information about proper identification, and plenty of memes. TikTok videos put forth by TSA agents consisted of similar content, including fun skits about the dos and don'ts of carry-ons. And though Schumer acknowledged the creativity and humor behind the videos, he still strongly urged TSA TikTok users to stick with other platforms.

The TSA and DHS aren't the only U.S. entities that have instituted bans and restrictions based on similar security concerns. The Army banned TikTok for soldiers in January, claiming the platform was a "cyber threat." The Navy also took actions to ban TikTok from government-issued phones, while the Marine Corps banned its soldiers from using the app on official phones.

Whether the TSA is just another agency on a long list of TikTok bans to come is unknown. But what is for sure is that your days of seeing TSA workers post playful TikTok videos of them lip-syncing in their uniforms are over.