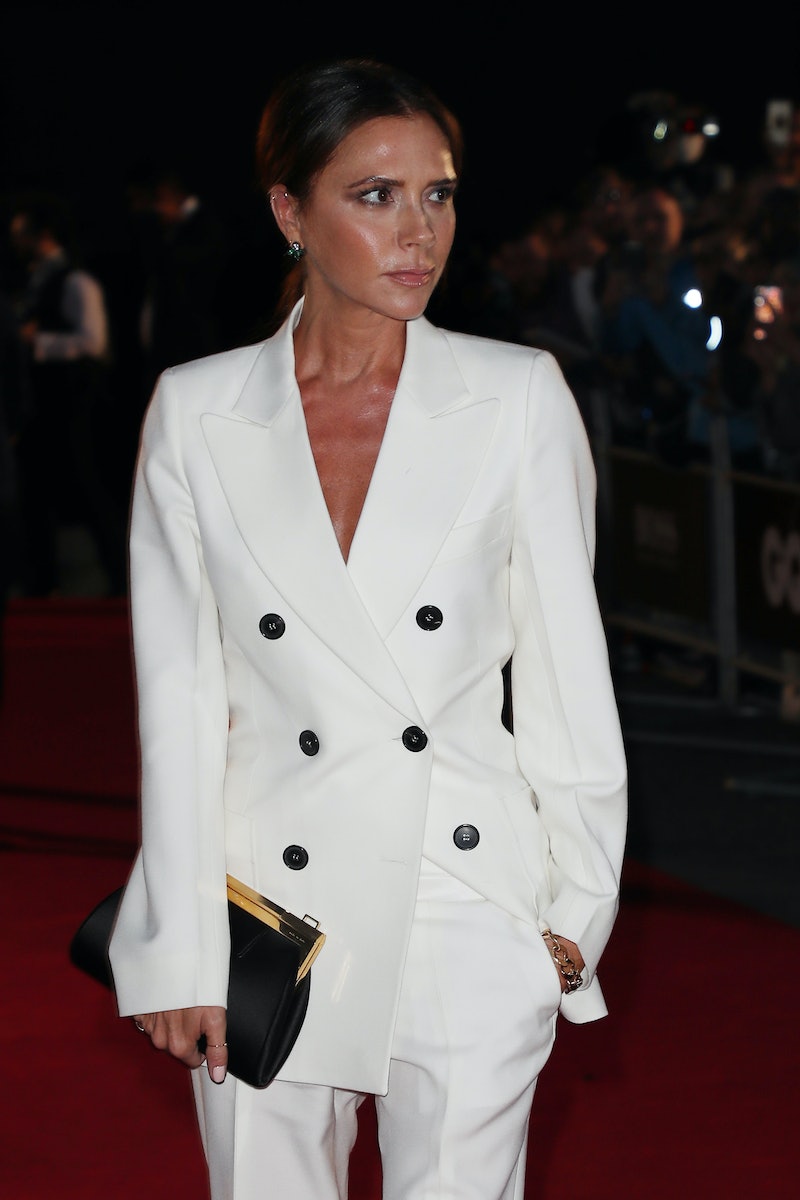 In case anyone wondered if Posh Spice remembers her old moves, Victoria Beckham danced to a Spice Girls song with her son Romeo James, and the performance will make fans wish the star joined the band's reunion tour. Beckham made a cameo on Romeo's TikTok account, dancing with her son to "Spice Up Your Life." Taped in what appears to be the family kitchen, the two danced side-by-side in matching all-black outfits, and Romeo grinned as he did his best to keep up with his mother.

Romeo captioned the video, "#spicegirls #poshmum," marking one of his very first videos on the platform — on Monday, his new TikTok account had over 92k followers. Beckham promoted the TikTok on her Instagram Story as well, writing, "Go watch our Tik Tok" with the crying laughing emoji, according to People.

Beckham's children, who include her sons Brooklyn Joseph and Cruz David, as well as daughter Harper Seven, have often proved to be huge Spice Girls fans. In July, Beckham posted a photo of Harper posing in front of a picture of Posh Spice on Instagram, doing her mother's signature peace sign pose. The singer captioned the photo, "When u bump into Mummy Spice! X #HarperSeven #girlpower."

Romeo's TikTok thrilled Spice Girls fans, and the video will make viewers wish Beckham joined the reunion tour. In Nov. of 2018, the Spice Girls announced an official reunion with arena dates across the UK, according to Elle. Despite enthusiasm for the comeback tour, Beckham opted not to join the reunion, and discussed the decision in an interview with Vogue Germany, saying, "It took me a lot of courage not to go on tour with the Spice Girls again."

The fashion designer explained her priorities had changed since the 90s, stating, "I'd rather concentrate on my family and my company." But there's no hard feelings. In Nov. of 2018, The Spice Girls discussed Beckhams decision on The Jonathan Ross Show, expressing their complete support. "The philosophy of us is that we are a band, on and off the stage and we care for each other," Emma Bunton, aka Baby Spice, said, "we support each other and we support her and she has been a huge part of our lives and we care about her, so it’s all good."

Ahead of the reunion tour, Beckham posted a sweet message for the Spice Girls on Instagram, posting a throwback photo of the group. She wrote, "Good luck to the girls today as they start their tour! x VB #SpiceGirls #FriendshipNeverEnds."

Beckham may be unlikely to return to the Spice Girls anytime soon, but her appearance in Romeo's TikTok shows the singer still has the moves if she ever wants to join them for a song or two.