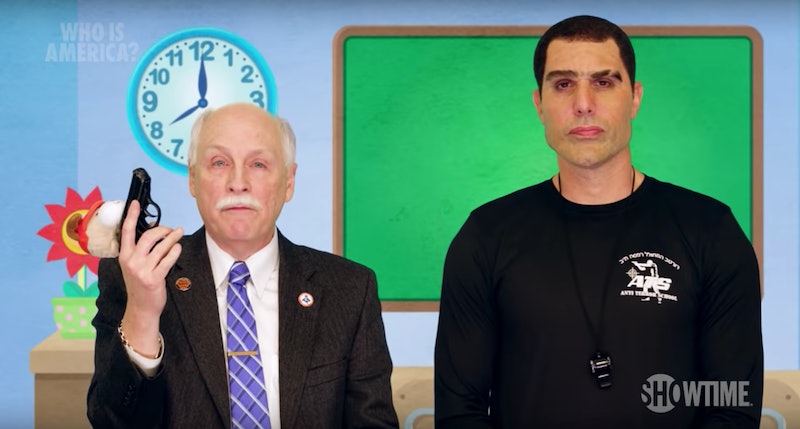 Sacha Baron Cohen's new program Who Is America? debuts on Showtime Sunday night, but don't wait for the premiere. There's a preview on YouTube that is completely wild. Baron Cohen got congressmen to talk about arming preschoolers on camera — and they actually endorsed it. "The NRA wants to arm the teachers," Baron Cohen explains in the intro. "This is crazy, they should be arming the children!"

Since Trump was elected, Baron Cohen has been flying around the country getting famous Americans — in particular conservative Republicans — to speak with him on camera. Perhaps most well known is former Alaska governor Sarah Palin, who acknowledged last week she had been duped.

In the clip released on YouTube, the focus is completely on guns. His invented character Col. Erran Morad, an Israeli former Mossad agent, goes around the country engaging pro-gun advocates and Republican politicians about his program to teach kindergarteners to use guns. He gets at least two sitting Republican members of Congress to support the measure on camera, as well as former elected officials like former Senate Majority Leader Trent Lott.

Lott spoke straight into the camera for his endorsement. "I support the Kinderguardians program," Lott said. "It's something we should think about in America, about putting guns in the hands of law-abiding citizens — good guys — whether they be teachers or whether they actually be talented children or highly trained preschoolers."

Congressmen Rep. Joe Wilson (R-SC) and Rep. Dana Rohrabacher (R-CA) expressed the same sentiment. "A three-year-old cannot defend itself from an assault rifle by throwing a Hello Kitty pencil case at it. Our founding fathers did not put an age limit on the Second Amendment," Wilson told the camera.

Before the political endorsements, he introduces the idea to pro-gun advocate Philip Van Cleave, the president of the Virginia Citizens Defense League. Baron Cohen explains his initiative to arm little kids, and Van Cleave notes that liberals say guns are to blame for the shooting.

"They blame it on the guns?" Baron Cohen responds, shocked before continuing to explain his initiative. "We started a program in Israel for kinderguardians. We train them from the age 16 down to the age 3."

Van Cleave says it sounds like a "good idea," and then Baron Cohen shared something even more outrageous.

"My son was in the very first program — may he rest in peace," Baron Cohen says. "He died doing what I love."

Then Baron Cohen gets Van Cleave to tape an instructional video for kindergarteners to learn about firearms. And it's beyond outrageous. "We want three-year-olds who are real experts at what they're doing, not three-year-olds who are careless," Baron Cohen in character said, convincing Van Cleave to participate. "We don't teach two year olds because they call it the 'terrible twos' for a reason."

Van Cleave agrees and shows children on camera how to use a "puppy pistol." It's basically a gun with a puppy stuffed animal on top. "Feed him with his lunch box and push it in his tummy," Van Cleave said, explaining in the video how to put a magazine in the gun.

He also teaches the kid a pro-gun version of the children's song "Head, Shoulders, Knees and Toes" in which the lyrics are "Head, shoulders, not the toes," explaining for kids where to aim.

Then Baron Cohen, as Morad, went to meet lobbyist Larry Pratt, head of Gun Owners of America. He explains to Pratt why they need to pass a law supporting his Kinderguardian program. "The good thing about toddlers is that they don’t really have fear of guns. This fear is given to them by the media,” Baron Cohen said.

These wild scenes and others you really have to watch for yourself. And the preview is up on YouTube.