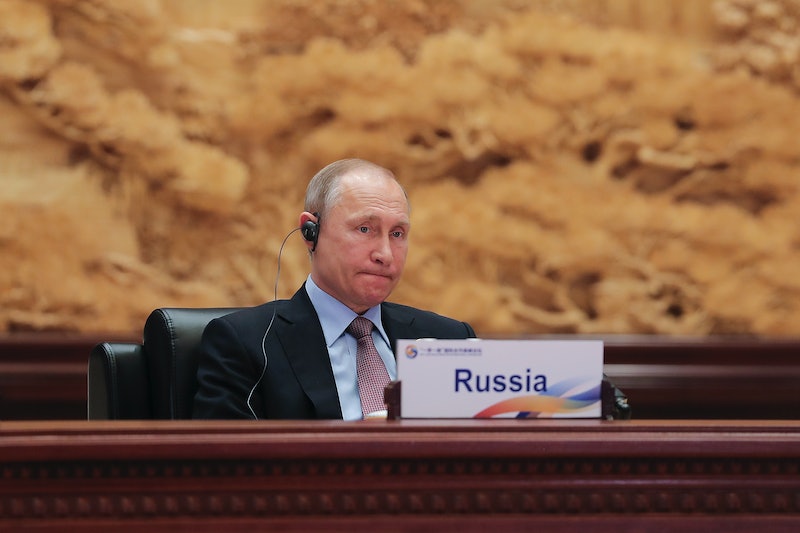 Russian humor is known to be wry, dark, and often replete with sardonic punchlines. Perhaps keeping with that tradition, Russian president Vladimir Putin offered James Comey political asylum while speaking on a Russian call-in show on Thursday — though whether or not he meant it was up for debate.

During the program Direct Line, Putin described Comey's leaking of conversations with Trump as "weird," according to translators. He said, "It sounds and looks very weird when the chief of a security agency records his conversation with the commander in chief and then hands it over to media via his friend."

Putin then talked about the comparison between Comey and American whistleblower Edward Snowden, who was granted asylum in Russia in 2013 after leaking classified information from the National Security Agency. He pointed to the similarities between the two: Both seemed to have leaked confidential conversations and documents to the public. The Russian leader said that if Comey faced any consequences for his leaking of conversations, then "we are ready to offer political asylum in Russia to him as well."

While it was not clear whether Putin's offer was serious, many justifiably considered it a joke, give the prominent role Russia is playing in discussions of American politics today.

Direct Line is an annual show wherein viewers can send a broad range of political queries to the Russian leader, which he addresses over a course of several hours. In the 15th edition of the show — which spanned four detailed and intense hours — Putin dabbled in heavy topics on the Russian economy, foreign policy, the Ukrainian crisis, and much more.

Inevitably, the ongoing Russia probe in the United States was broached on the program. Russia's role in the 2016 election has been a contentious, ongoing topic. The investigation into possible collusion between Donald Trump's campaign and Kremlin officials most recently expanded when news broke that special counsel Robert Mueller is looking into whether Trump himself attempted to obstruct justice.

On Thursday morning, the president took to Twitter to air his grievances: "You are witnessing the single greatest WITCH HUNT in American political history — led by some very bad and conflicted people!"

His comments on Comey and the leaks aside, Putin made a note on the show that Russia actively seeks cooperation with the United States. He mentioned that both countries could do well by collaborating over issues of global poverty, climate change, curtailing weapons of mass destruction, and preventing escalation between the United States and North Korea.

Suggestions on the show about whether Russia had colluded with Trump's campaign during the presidential race were rejected wholly. Instead, Putin placed emphasis on Russia's intention to improve its relations with the United States. Putin said: "We don’t see America as our enemy."