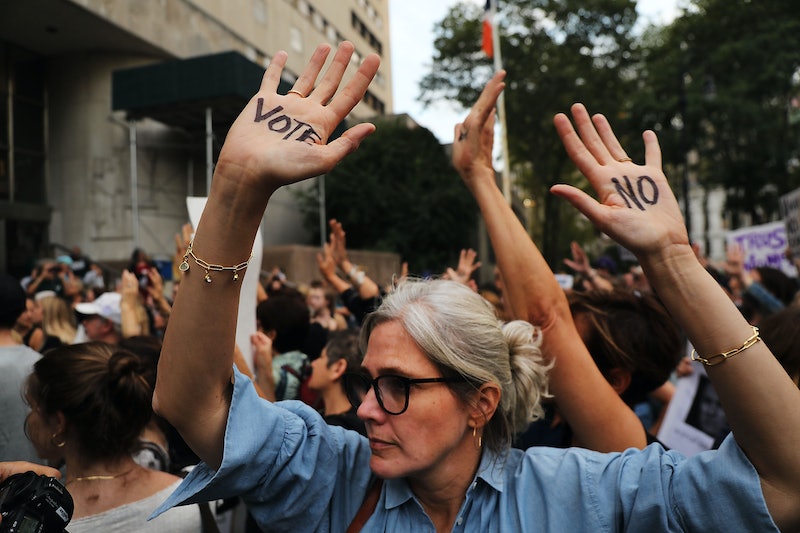 Senate Majority Leader Mitch McConnell filed for a procedural vote known as "cloture" Wednesday night, moving toward Supreme Court nominee Brett Kavanaugh's confirmation vote. Cloture, if passed, requires the Senate to make a final decision on a matter within 30 hours. What happens if the cloture vote on Kavanaugh fails, however, looks much different. In that case, the debate over his confirmation could continue for an undefined amount of time.

The Senate may only vote on cloture two days after it's been filed for, meaning the earliest the vote can take place is Friday morning. According to McConnell, this leaves "plenty of time" for senators to review and be briefed on the FBI's supplemental background investigation. The FBI's report, completed Wednesday night, addresses the sexual assault allegations made against Kavanaugh, which he categorically denies.

A cloture vote typically needs three-fifths of the full Senate, or 60 votes, in order to pass. For cloture on presidential nominations, however, precedents set in 2013 and 2017 require that just a majority, or 51 senators, vote yea. If there's a tie, the vice president may vote as well.

Just filing for cloture requires the signatures of at least 16 senators, and on Friday, Business Insider stated there are 49 senators who are likely to vote in favor of Kavanaugh's confirmation. Assuming all these individuals would want cloture to pass, McConnell has almost all of the votes he needs to get a confirmation (or not) within 30 hours of Friday's cloture vote.

If, however, this is not the case — at least one of those "likely yea" senators, Jeff Flake, has inched back onto the fence since Friday — the Senate will not be forced to take a vote on Kavanaugh's confirmation. This means there will be no definitive end to the debate: Democrats could, if they wanted, filibuster until the midterm elections have passed, hoping to gain a majority.

This is essentially what Republicans did under President Barack Obama. When Obama nominated Merrick Garland for the Supreme Court in spring 2016, the Senate Judiciary Committee signed a letter stating it would not proceed with any nominee. It was banking on a Republican win for the White House that fall (and the conservative nomination that would come with it).

While Democrats may filibuster, Republicans also have the right to file for cloture as many times as they wish. According to the Congressional Research Service, "there is no limit on the number of times that the Senate can vote on motions to invoke cloture on a bill, amendment, or other matter it is considering."

If anything, Friday's cloture vote could indicate where senators stand in terms of Kavanaugh's confirmation. As of Wednesday, Vox reports Republican Sens. Flake, Susan Collins, and Lisa Murkowski are undecided, as well as Democratic Sens. Joe Manchin and Heidi Heitkamp. With the Senate so closely divided, these swing votes could make or break Kavanaugh's confirmation.

It is possible a senator could vote in favor of cloture while remaining uncertain of their confirmation vote, however, giving themselves only 30 hours to decide.