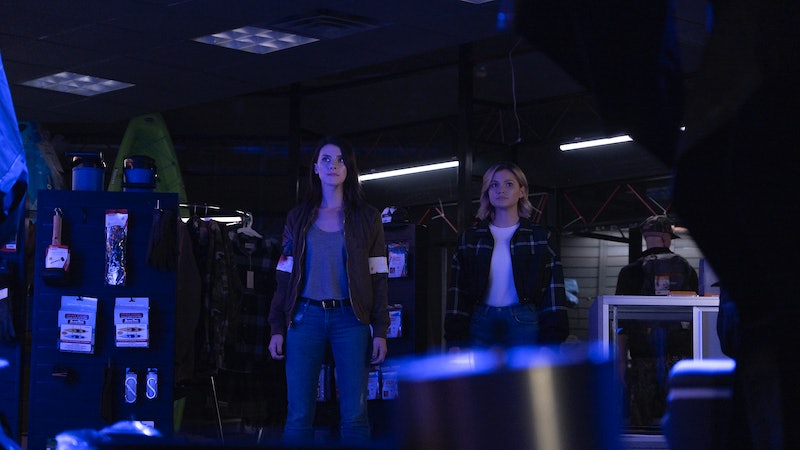 Spoilers ahead for Cloak & Dagger’s “Rabbit Hold” episode. Tandy went where no person has willingly gone before in search of answers. She allowed herself to be swallowed up into the dark dimension (that Tyrone apparently has no control over) to find Mayhem so they can continue to save more sex trafficking victims. But, she got way more than she bargained for when Mayhem tried to execute Connors. Tandy broke the dimension's rules and unlocked the secret to escape – however, she brought Connors out too. No one knows what will happen to Connors now, but things can’t possibly end well for him.

In the episode, Tandy figures out that the Darkforce protects Tyrone by swallowing up close by threats. So, Tandy heightens his fears and walks into the dimension, which is terrifying because she may not return. And, Tyrone quickly discovers that her absence renders his powers useless - which isn’t good considering he has street gangs hunting him down. Tandy finds Mayhem and convinces her that they have to work together to escape, so they begin to explore the realm. The duo finds Connors' creepy hangout filled with trash and black ponchos that look like Tyrone’s cloak.

Tandy and Mayhem continue their investigation, but Mayhem later disappears when Tandy is distracted to exact justice against Connors. Tandy stops Mayhem from hanging Connors and the poncho cloaks meld together to create a portal that sucks them back into reality. Tyrone and Tandy are dazed on the floor of the church, but Connors quickly escapes through a window. Mayhem's landing spot isn't revealed but it can be assumed that she made it back to New Orleans because she was standing so close to Tandy.

Connors has become deathly afraid of Tyrone after his, um, dark experience so he may decide to steal the first vehicle he can find and hop out of town. Either way, the Divine Pairing will have to put finding Connors at the top of their priority list. He’s the key to clearing Tyrone’s name and finally giving his family justice years after he murdered Billy.

It’s going to be hard to explain how and why he fell off the radar for over eight months, but at least his MIA time will make him look even more guilty, right? The police will definitely want to bring him in for questioning once they get word that he is back in town. It’s not likely that he will try to go back to his police buddies and play the victim, but anything is possible with this corrupt character. And, it wouldn't be smart for him to try to go against Tyrone again, lest he wants to be sent back to the dimension for good this time.

Mayhem will also be hunting him down to finish what she started in the dark dimension. She has all the anger (and none of the forgiveness) that O’Reilly had over Connors attempting to murder her last season so she won’t waste any time slitting his throat. Honestly, no one would miss him but his death would eliminate Tyrone’s chances of ever getting off the NOPD’s Most Wanted list.

Hopefully, Tyrone and Tandy will bring Connors down swiftly and make him finally pay for his crimes.