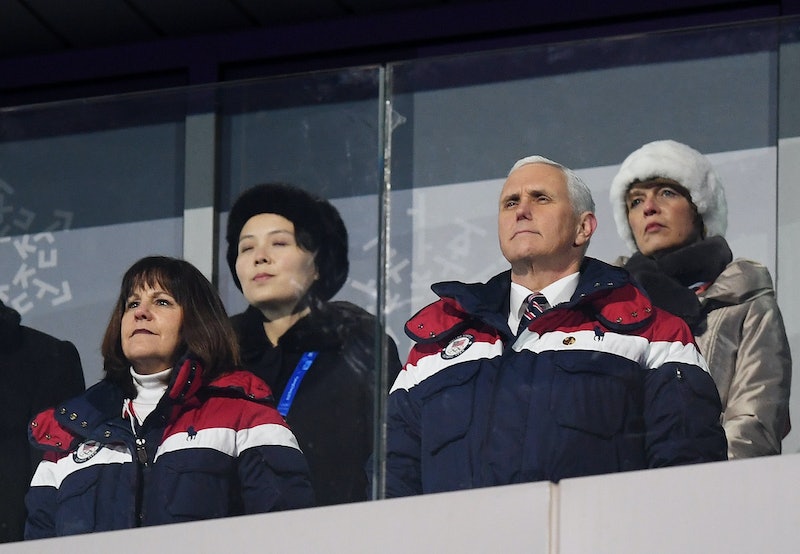 Mike Pence just finished a tour of Asia in which he called North Korea the "most tyrannical and oppressive regime on the planet." But as he returned to the United States, the vice president seemed willing to open up a dialogue with the country. The specifics of any U.S.-North Korea talks remain to be seen, but they'd surely center around North Korea's nuclear and missile programs.

Pence told reporters aboard Air Force Two on Sunday that now is the time for "maximum pressure and engagement at the same time.” The reassessment comes as South Korea begins some of its friendliest contact with the hermit kingdom in years, and Japan warns other countries about North Korea's "smile diplomacy."

In the past, the Trump White House has demanded that North Korea take steps to stop its weapons programs before hoping for any direct negotiations. But that hardline position appears to be softening, following a conversation between Pence and South Korea's president, Moon Jae-in. Moon promised Pence that he wouldn't give the North any concessions just for talking.

That led to Pence telling a Washington Post reporter on the plane:

The point is, no pressure comes off until they are actually doing something that the alliance believes represents a meaningful step toward denuclearization. So the maximum pressure campaign is going to continue and intensify. But if you want to talk, we’ll talk.

Earlier that week, Pence told reporters while en route to Asia just what he would say if he were to see the North Korean delegation at the 2018 Winter Olympics in PyeongChang (no meeting never materialized). His comments, via the Washington Post, could shed some light on what the United States would want to talk about in any potential meeting:

That North Korea must once and for all abandon its nuclear weapons program and ballistic missile ambitions, and it must accede to the wishes not only of nations across the region and the United States, but nations across the world, to really abandon those ambitions and enter the family of nations. North Korea can have a better future than the militaristic path, the path of provocation and confrontation that it’s on. Better for its own people, better for the region, and better for peace.

As for the North Koreans, they would likely be bargaining for sanctions relief and economic support. Ri Son-gwon, the head of the North Korean delegation at the Olympics, didn't address the country's weapons programs with South Korea. "The target of all of our nuclear and hydrogen bombs and ICBMs and all other sophisticated weapons is the US," he said. That would put the weapons programs at the center of any forthcoming talks.

North Korea still considers itself at war with the United States, as there was no peace treaty at the end of the Korean War. The regime's ultimate goal is reunification with South Korea on its terms, as well as a removal of U.S. troops and weapons from the region.

That will be an absolute non-starter for the United States, so a reduction in sanctions is perhaps the best that North Korea can hope for. Reports point to sanctions finally having their intended effect of crippling North Korea's economy and even preventing the country from paying its dues to the United Nations.

If that's what North Korea wants, they should expect the Trump administration not to budge in response. Before his trip, Pence tweeted that all options are on the table. "I’ll travel to Japan & S Korea to attend the Olympics & cheer on our athletes," Pence tweeted. "But I’ll also be there to deliver a message: the era of strategic patience is OVER. As N. Korea continues to test ballistic missiles & threaten the U.S, we’ll make it clear all options are on the table." Now, talks do appear to be one of those options.