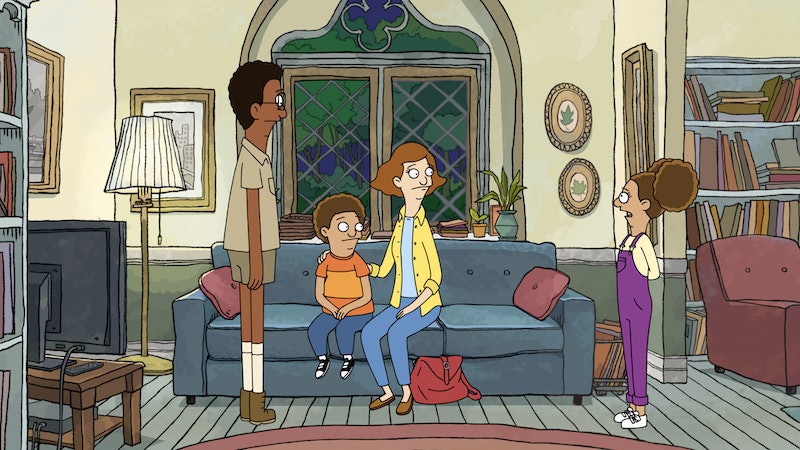 Good news, Bob's Burgers fans: creator Loren Bouchard's new Apple TV+ show, Central Park, has already been renewed for Season 2. After Fox passed on the show, the streaming platform won a bidding war over Netflix and Hulu, giving Central Park a two-season, 26-episode straight-to-series order in March 2018, per Deadline. It hasn't yet been announced when the second season will premiere, but given that the writers have had over two years to plan — and that, as an animated show, they don't have to worry about COVID-19 affecting filming — it shouldn't be a long wait.

Each of Central Park's 25-minute episodes centers on the Tillermans, an eccentric New York family comprised of park manager Owen (Leslie Odom Jr.), his journalist wife Paige (Kathryn Hahn), and the couple's biracial children Molly (Kristen Bell) and Cole (Tituss Burgess). The Tillermans, who live in a mini-castle in Central Park, are constantly fending off hotel heiress Bitsy Brandenham (Stanley Tucci) and her assistant Helen's (Daveed Diggs) schemes to drive people away so they can fill the park with condos.

Diggs recently told Broadway World that he hopes "people find a lot of joy" in the show — including his portrayal of a "long suffering" old woman. "I tried some things up front which were all shot down," the Tony winner joked of creating Helen's voice. "I kept being told that my own voice was totally appropriate for this elderly white woman, so I don't know what that says about me."

Frozen's Josh Gad, also an executive producer, rounds out the all-star voice cast as both park regular Birdie and the show's narrator, while Bob’s Burgers executive producer Nora Smith joins behind the scenes. With two of the brains behind Bob's Burgers at the helm, there's assuredly more fun around the corner when Central Park Season 2 eventually makes its way to screen.

More like this
The Plane Crash In 'Dear Edward' Is Based On A 2010 Tragedy
By Grace Wehniainen
Netflix Shut Down 'Bridgerton' S3 Rumours About A “Very Dark” Storyline
By Bustle
The 'Freeridge' Cast Shared Their Hopes For A Potential Season 2
By Grace Wehniainen
Everything To Know About A Potential 'Lockwood & Co.' Season 2
By Gretchen Smail
Get Even More From Bustle — Sign Up For The Newsletter
From hair trends to relationship advice, our daily newsletter has everything you need to sound like a person who’s on TikTok, even if you aren’t.