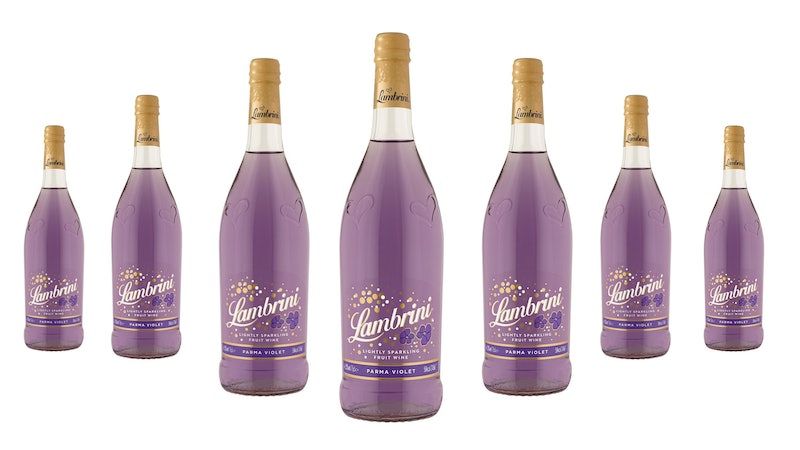 It's hot outside guys and you 100 percent need to up your drinking game. Apart from increasing your intake of water and keeping yourself hydrated, it's a perfect time to try new summery alcoholic beverages. And as it's 2019 there are a serious amount of options to imbibe. What a time to be alive. For some though, fans of things on the sweeter side, Lambrini might already be in their fridge. But hey guys, if you want a cheap as chips tipple with a seriously fragrant twist you'll need to know where to buy new Lambrini Parma Violets.

Holy moly. Parma effing violet flavour?! Lit. So for those not in the know, Parma violets are famous British sweets created by confectionary brand Swizzels back in 1946. Swizzels also famously make the likes of Drumsticks, Love Hearts, and Refreshers.

The exciting new bev will be available exclusively at your local Morrisons for a mere £2.50. As they say down the market, a bargain at twice the price. Meaning you should almost definitely buy two because why not?

Potentially your retro tipple of the season.

The move to make Lambrini flavoured by the famous sweeties is a celebration of 25 years of the iconic sparkling wine. Yes the fizzy boozy bev was born in 1994, meaning that Lambrini is in fact celebrating its 25th birthday this year. Yes, 1994 was 25 years ago. I know, I don't believe it either.

Since its inception, The original, which is a slightly sparkling medium sweet perry, has been joined by some other flavours. These include the a strawberry and cherry flavour, and the now sadly discontinued peach flavour. However, the Parma Violet edition is brand spanking new and ready for you to try.

This might sound like an absolutely bonkers hybrid but guys, those Parma Violets guys are not afraid of getting a little bit freaky when it comes to mash ups. Because this flavour is one that is about as iconically British as they come. It's by far the first time they've blended it with other food and drink products.

As a matter of fact, controversially, they only went and made an effing cheese in 2016. Swizzels teamed up with The Cheshire Cheese Company to create a decidedly unique product in honour of the highly perfumed sweets' 70th birthday. According to their website the product "combined the savoury bite of Cheshire cheese with the sweet distinct taste of Parma Violets."

No, you're gagging. The confectioners told The Metro at the time: "We wanted to give the nation something special and different. We know Parma Violets have a unique flavour that divides the nation and we think this cheese will do the same." Wow. Baby all I want for Christmas is NOT that on the cheeseboard. Or on my cheese on toast thank you very much.

Unfortunately the cheese is no longer available to buy but don't worry guys, you can still pick up your cheeky bottle of Lamb at a Morrison's store near you for a mere £2.50. A total steal.