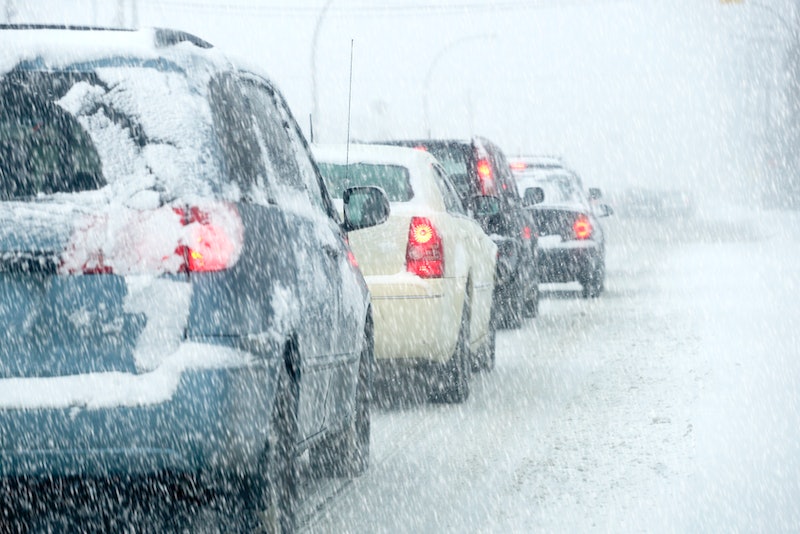 Earlier today, America's favorite Pennsylvanian rodent saw his shadow, thereby decreeing the persistence of the winter season. Don't trust the groundhog? The little guy might be on to something, as forecasts are predicting an unseasonably frigid upcoming few days.

If your plans include tuning in to this weekend's Super Bowl LII, depending on where you live you'll want to make sure the party you're attending is not a backyard barbecue. Beginning Feb. 2, a significant amount of the continental US is experiencing some especially harsh wintry weather stemming from an arctic blast, reports ABC News. The cold front is said to be large enough to span from much of the upper midwest to the northeastern coast. Proximity to the eye of this weather system—which is in the midwest— looks as though it will determine which states will be affected by the arctic blast more than others.

According to ABC, the Upper Midwest to the Northeast will be the region most affected by the arctic blast; temperatures will see drastic drops in South Carolina, Minnesota, Pennsylvania, New York, and Massachusetts; wind chill is expected to hit as low as 24 degrees in Minneapolis, and 1 degree in Boston.

Granted, no matter what Punxatawney Phil predicted, it is still winter. So, cold weather should be expected by now in much of the country, right? Perhaps, but this is the second arctic blast to hit the United States in less than a month. This cold spell also comes after a rare bomb cyclone absolutely slammed the East Coast, bringing heavy snow and historically high tides.

The south is not an area typically associated with cold weather. Rather, it often serves as a temperate reprieve in the form of a vacation destination for many who live in the northern hemisphere. But even it could not completely avoid the cold. In the music capital of the east coast, Nashville, Tennessee, the wind chill dropped as low as nine degrees on Feb. 2. This is almost forty degrees lower than the average high temperature this same date.

Philadelphia, a solidly mid-Atlantic state (and one that will be particularly electric with excitement this weekend) is expected to see wind chills as low as as seven degrees Friday evening; this after much of the area saw scattered snow flurries earlier in the day. Football fans may have been able to scale Crisco-covered telephone poles during the playoff game a few weeks back, but achieving such a feat when poles are greased AND frozen is another challenge entirely.

The city that will arguably be affected the most by the latest arctic blast is one that is hardly a stranger to subzero temperatures. Minneapolis, the city hosting Sunday's Super Bowl, has slated its reputation as one of the coldest areas in the country, but this weekend's weather system could bring wind chill temperatures as low as negative twenty four degrees. That is almost FIFTY degrees below the average high temperature in the city. Between Sunday's game now expected to be the coldest on record and the possibility of additional snow showers, players and attendees alike are lucky it is taking place indoors.

As unpleasant as it may feel outside, this is nothing compared to the frigid weather in the Eastern United States almost three years ago. In 2015, a polar vortex hit the country, bringing historically low temperatures to an area stretching from North Dakota all the way to Miami, Florida. During the week of February 20, record low temperatures were recorded in New York, Pittsburgh, Washington, D.C., Atlanta and Miami as a result of cold air that had migrated from Siberia.

While it may be cold outside, it is good to remember this is not the coldest it has been in recent memory this time of year. Plus, realistically this likely will not be the last cold front of the season. But don't despair — instead use this weekend as an opportunity to curl up by the fire, read a good book, and drink some hot cocoa while you watch the the Philadelphia Eagles maybe win their first ever Super Bowl rings Sunday night.