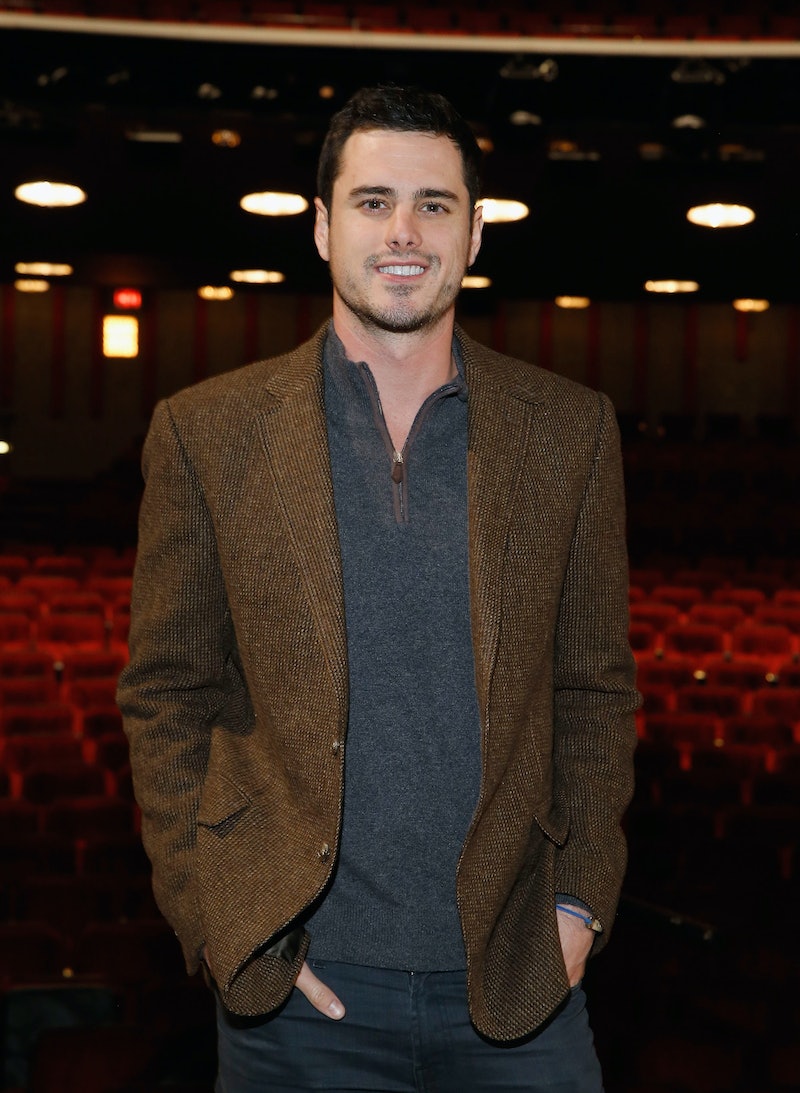 New year, new Ben Higgins. The former Bachelor star split with his fiancée Lauren Bushnell a little over a year after they got engaged on the show, and he spent the next year and half recovering from the breakup. But now, it looks like Ben Higgins is dating again.

It came as a shock to listeners of Ben's podcast with fellow Bachelor alum Ashley Iaconetti that Ben had found himself a girlfriend after all this time. As Bustle previously reported, Ben revealed the news during a January podcast with special guest and current Bachelor Colton Underwood. "I was just telling someone the other day, I started dating again. This is big news, right? I am dating," Ben said during the podcast.

It is big news, because the most recent information fans had about Ben's dating life is that he wasn't ready. After his May 2017 breakup, he appeared on Bachelor: Winter Games, which aired in February 2018. But he ultimately left the show because he still hadn't healed from his breakup with Lauren. "To be honest, I'm still emotionally dealing with the loss of that relationship," he said at the time, according to E! News.

In August 2018, he told Us Weekly that he was "not dating," but was "interested in dating, open to dating." Between then and January 2019, it seems he became fully open to dating, because Benny's got himself a GF, and she sounds awesome for him. In fact, Ben described her on the podcast as "the best" person that he knows.

But if you were hoping he'd spill a name, you'll be disappointed. Ben is (understandably) keeping her identity private for now. "I’m not hiding anything," he said during a follow-up podcast, according to Us Weekly. "I think you go through public relationships before and you kind of deal with that pressure. And there’s the right timing to it all, to kind of make it a thing and publicly put it out there."

Ben has previously discussed his issues with dating in the public eye, citing those concerns as one reason he almost didn't do Winter Games at all. "I had a hard time accepting the idea that the public would view and judge a relationship I could pursue. Being scrutinized takes a huge toll on a couple," Ben wrote on his blog, according to E! News.

But we do know some things about Ben's new partner. According to Us Weekly, he said in that follow-up podcast that "she’s not from Colton’s season" and "not from the show." They're also in a long-distance relationship, according to what Ben said on the first podcast. But he's utilizing the communication skills that The Bachelor helped him develop to bridge that distance. "[The show] forces you to have conversations … so we FaceTime a lot and it feels very similar because we don't get time together. It is very intentional. It is very focused. If we're gonna spend any time with each other, it's going to be in conversation," he said on the podcast.

Ben did say that he'd be talking more about his girlfriend in a podcast to come, so perhaps we'll all get the details soon. Until then, it's totally understandable that Ben would want to protect her privacy. So let's all respect that and let Ben reveal her identity if and when he chooses.

More like this
Where Is Clayton Echard Now? The Former 'Bachelor' Star Is Dating Susie Evans
By Kadin Burnett
Everything To Know About 'Bachelor' Host Jesse Palmer
By Justice Namaste and Radhika Menon
Former 'Bachelor' Producer Elan Gale Knows The Secret To Your Favorite Shows
By Samantha Rollins
Here's Our Ranking Of The Funniest 'Bachelor' Casting Ad One-Liners So Far
By Grace Wehniainen
Get Even More From Bustle — Sign Up For The Newsletter