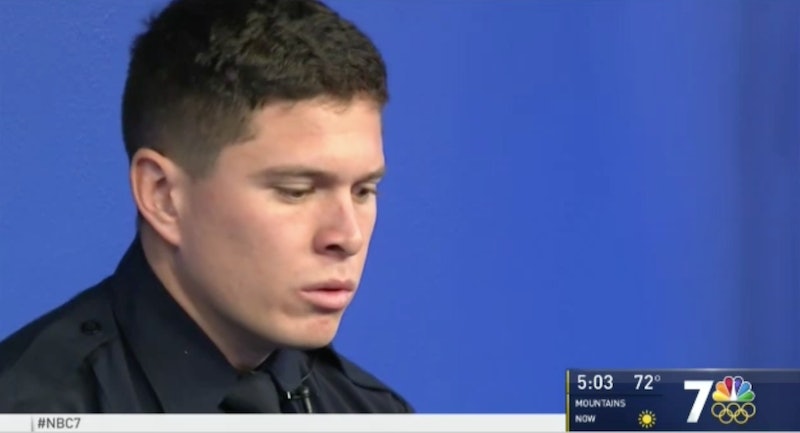 In the deadliest mass shooting in modern American history, bullets rained down from a hotel suite at the high-rise Mandalay Bay Resort and Casino, killing at least 58 people and injuring nearly 500 others. In the chaos and horror that unfolded many risked their lives to help save the lives of those around them. Heroes like Tom McGrath, an off-duty police officer from San Diego, is credited for saving a man who had rescued at least 30 people from danger.

In an emotional interview on CNN, McGrath was reunited over the phone with Jonathan Smith, a hero in his own right who helped bring at least 30 people to safety during the Las Vegas massacre. Smith was shot in both the arm and the neck while assisting others but was reportedly helped to safety by McGrath who also worked to stop his wounds from bleeding.

Smith told CNN's Erin Burnett he considered McGrath his brother, adding, "I owe that man my life because from the moment I got hit, he was the first one to actually help me stop the bleeding."

McGrath, however, argued it was Smith that had shown "tremendous bravery" in Las Vegas. "He's somebody who inspires me," McGrath told CNN. "I know he might not want to give himself all the credit, but he definitely did a wonderful job and I was just happy to be there to help him towards the end and get him out of there when he was hit."

According to NBC San Diego, McGrath had been attending the country musical festival, Route 91 Harvest, with his wife and friends on the Las Vegas strip when gunshots broke out. Wearing swimming shorts and flip flops McGrath immediately began to assist those near him who were injured: a woman standing behind him who was shot in the chest, another woman with a leg injury, and at one point, Smith.

"I remember holding his hand," McGrath said of helping Smith in an interview with NBC San Diego. "I told him he just needed to fight. He had made it this far. He did everything right. Now is the time to fight."

In a post on her personal Instagram, McGrath's wife, Tiffany, said her husband went into action immediately when they first heard the gunshots and "used his own body to shield me and others from bullets as those next to us were shot." But the couple was separated shortly after. "As soon as the second round [of gunshots] stopped, he told me, 'I just need you to run,'" Tiffany told Fox 5 San Diego. In the chaos, the couple was separated and rather than hide or only search for his wife, McGrath began to help those around him.

"A lot of people had gotten hit," McGrath told the San Diego Tribune. "I was checking them, one, to make sure they weren't my wife and, two, to see if there was any aid I could lend them."

On Instagram, Tiffany applauded her husband's heroic actions along with those of everyone else who offered aid during the shooting. "When we were separated and he realized he could no longer protect me he stayed behind to hold pressure on gunshot wounds and carry people to trucks for departure to hospitals," Tiffany wrote on Instagram. "He and all the other off duty officers, military personal [sic], and anyone else in the venue and out who helped save a life tonight are the true heroes."

But McGrath is quick to point out that he wasn't the only hero at work in Las Vegas on Sunday, telling a NBC San Diego affiliate, "Nobody suffered alone. There was a lot of good people out there. A lot of people were heroes."