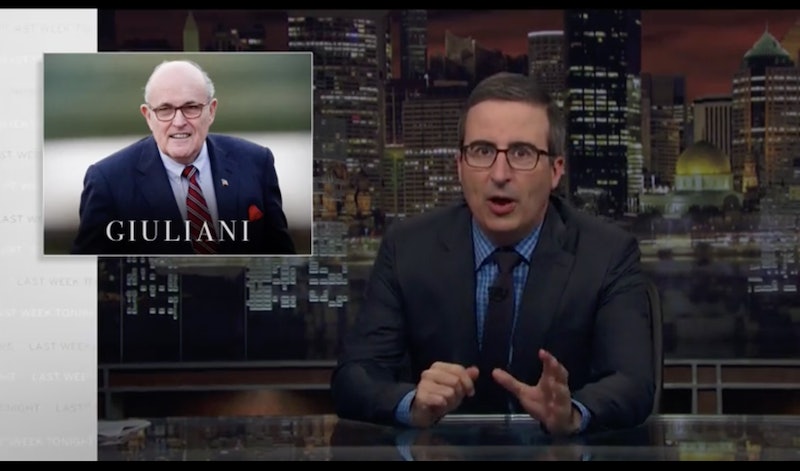 Sunday's episode of Last Week Tonight opened with a searing critique of President Trump's lawyer following his controversial remarks about the meaning of "truth" over the weekend. In fact, host John Oliver noted that Rudy Giuliani's "truth isn't truth" remark is probably not even the most damning thing the former New Yorker mayor said to the press in recent days. Indeed, Oliver took him to task for making remarks so controversial that they could potentially implicate President Trump instead of help him.

Oliver opened his show by playing a segment of Giuliani's now widely-reported "truth isn't truth" remark. In the clip, Giuliani told Chuck Todd, the host of NBC's Meet the Press, that "truth isn't truth" while discussing Trump's reluctance to conduct an interview with Special Counsel Robert Mueller as part of the Russia probe. Giuliani has received much criticism for this comment, though, according to Oliver, this did not constitute the "dumbest" thing Giuliani said during the interview.

The late-night host then played a clip of Todd and Giuliani discussing a 2016 Trump tower meeting between Trump campaign officials and several individuals linked to Russia. In the clip, Giuliani plainly stated that the purpose of the meeting was to acquire information about Trump's rival in the 2016 presidential race, Hillary Clinton. When discussing the meeting, Giuliani told Todd, "Well, because the meeting was originally for the purpose of getting information about, about Clinton." Todd reacted by pointing out that having a meeting with that purpose is "in itself attempted collusion," to which Giuliani adamantly replied, "No, it's not!"

In response to this clip, Oliver appeared completely aghast, suggesting that Giuliani could get Trump into trouble. As the comedian exclaimed,

What is Giuliani doing, and why does the White House keep letting him go on TV? Because at this rate, Trump is going to wind up behind bars with Giuliani visiting him and saying, "Don’t worry, Donald: Prison isn’t prison."

This is not the first time a late-night host has taken Giuliani to task for his apparent gaffes while serving as Trump's legal counsel. For example, back in May 2018, several comedians condemned Giuliani for seeming to suggest that Trump had lied about whether he knew about a payment made by his former lawyer Michael Cohen to adult film actress Stephanie Clifford, otherwise known as Stormy Daniels.

At the time, late-night TV eviscerated Giuliani for seemingly contradicting Trump. As comedian Seth Meyers exclaimed on his May 3 show, “Rudy! What is wrong with you? You’re the president’s lawyer, and you just told everyone he lied on TV. On Sean Hannity’s show! You cracked under no pressure!"

Overall, Giuliani's commentary seemingly does not always serve in the best interest of his client, President Trump. Oliver, for one, appears to be flabbergasted as to why the president's lawyer continues to be conducting media interviews in light of these apparent gaffes.