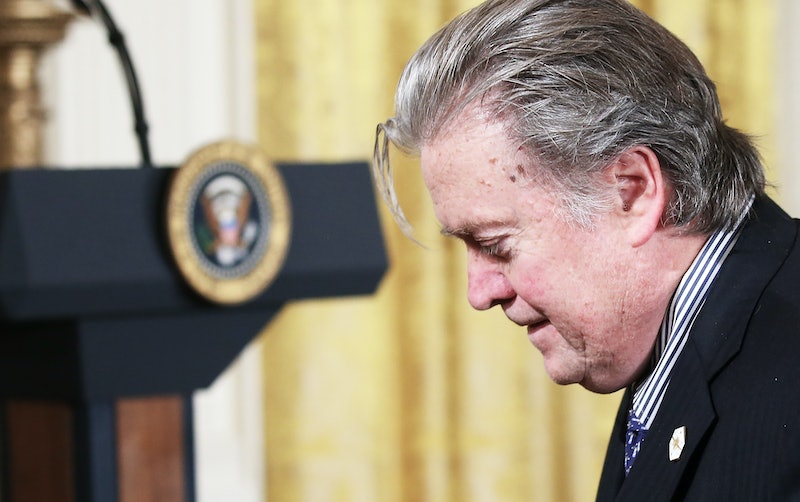 On April 5, America — now used to the merry-go-round of Donald Trump's White House — learned that the president removed former Breitbart CEO and current chief strategist Steve Bannon from the National Security Council. The White House's predominant narrative was that it had been their plan all along, and that Bannon had been put in place to "keep an eye on" Michael Flynn, the disgraced Army lieutenant turned security adviser who resigned in February amid reports that he'd had contact with Russian political figures. Yes, Bannon leaving the security council is good news, but we shouldn't celebrate until he leaves the White House entirely.

Amid news of what appears to be a positive shift in power in the White House, it's easy to overlook how Bannon got there in the first place — by an unorthodox move to install a former executive at a right-wing publication on a security council whose seats are usually reserved for secretaries of State and Defense. In doing so, Trump demoted the Joint Chiefs of Staff, who normally sit on that important council. Whether or not Bannon was truly there to act as a check on Flynn (who was also promoted to the NSC in the first weeks of the new administration), the Trump White House proved that they could install someone in an important position without the approval of anyone but the president himself.

Trump giveth and Trump taketh away — this pattern has dogged the president since his days on the campaign trail, and at first glance, the Bannon demotion appears to be little more than the removal of yet another liability. Upon closer inspection, however, it appears that other than a shift back to the traditional structure of the NSC now that the Joint Chiefs have been promoted back to their original spots, not much has changed with the Bannon shake-up.

It's significant that Bannon lost his spot on the NSC, but Trump returning the council to its original structure might be the work of traditional Republicans urging the president to retain a semblance of White House status quo, rather than evidence of Bannon losing power in the West Wing. Until Bannon is out of the administration, he still poses a very real threat to the country — and his demotion shouldn't overshadow the danger he presents.