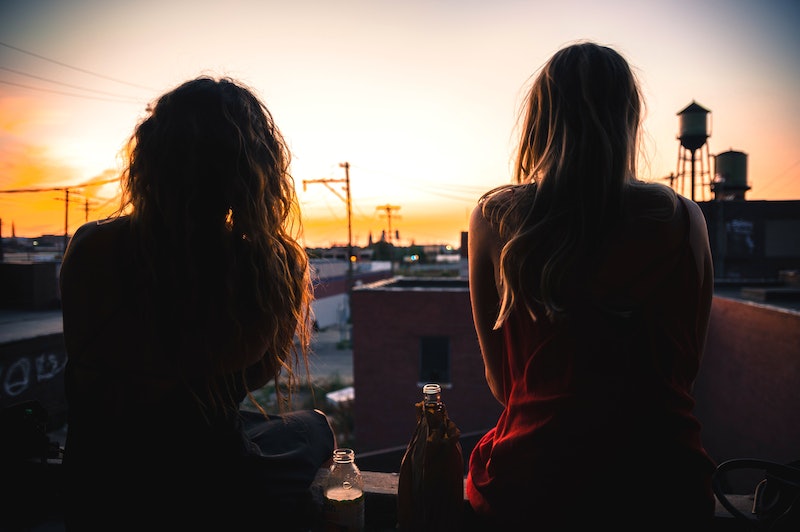 It's one thing to be supportive when your best friend is going through a relationship crisis. But it's another when you're so involved in your friend's relationship drama that you feel like it's practically your own. If you're the type of person who tends to get super involved in your friends' love lives, you might want to take a step back. Your friend's bad relationship experiences could be affecting you in ways you don't even realize. Because according to a new study published in Nature Communications, we can develop fear when we see other people experiencing pain or trauma.

"This kind of trauma is called 'vicarious traumatization'," licensed clinical psychologist and author of Stop Anxiety From Stopping You, Dr. Helen Odessky tells Bustle." It's the reason we can be affected by what's going on in the news or on the other side of the world or even in someone else's relationship."

Researchers from the Karolinska Institutet in Sweden conducted a study to see how we can develop fear without experiencing the traumatizing event firsthand. They hypothesized that the opioid system, which controls things like pain, rewards, and addictive behaviors, is supposed to help alleviate our fears and pain. However, not everyone's opioid system works effectively, so that's why some people are able to develop anxiety by witnessing others going through pain.

They conducted a double-blind study of 22 subjects. Researchers tried to alter the brain chemistry of some by giving them a substance to block the opioid system, while others were given an inactive placebo. Participants were then asked to watch a video where people were receiving electric shocks.

Normally, the brain will be exposed to dangerous stimuli and then adjust itself to the situation. For instance, people watching the video would be shocked during the initial electrical shocks given to those in the video. But as the video goes on, they should be less shocked because they know it's coming. However, the researchers discovered that those who had opioid systems that were blocked continued to react surprised even though they knew the shocks were coming. Those people also perspired more and felt subject to the threatening stimuli even though they weren't experiencing the pain themselves. This is a form of social learning that researchers say could help us understand the psychology behind fear.

Odessky says this happens when the amygdala in the brain, which is responsible for the fight or flight response, becomes overactive or too sensitive. When this occurs, the brain can set off more easily for panic and anxiety reactions.

Why Others' Bad Relationships Can Affect Us

While the study didn't specifically focus on relationships, Odessky says these findings can also extend to relationships, particularly in individuals who may already be vulnerable or have other history of trauma or difficulty with trust.

"We start constructing mental models of what a relationship is like and if we see the broken relationship as a standard, we may not want to engage in it at all," she says. "I particularly see this with young adults whose parents announce they are getting a divorce."

How To Deal With It

The best way to get over your fear is to work on your anxiety about what scares you regarding a relationship, she says. "We are all vulnerable in relationships, and only by embracing that vulnerability can we fully engage," Odessky says. "It's vital that we pick partners that are trustworthy and feel safe, and that we develop ways to cope with relationship uncertainties, such as heartbreak and loss."

It's easy to lose your faith in how good relationships can be when you're constantly exposed to the downsides. But that's why it's important to keep yourself in check and remind yourself that your friend's experiences aren't yours. If you find yourself developing a negative attitude towards relationships due to others' bad experiences, tell yourself that everyone is different. Just because something's happening in your friend's relationship, that doesn't mean it's going to happen in yours. So always be supportive, but never allow other people's lives influence your own. You'll find yourself much happier and open because of it.