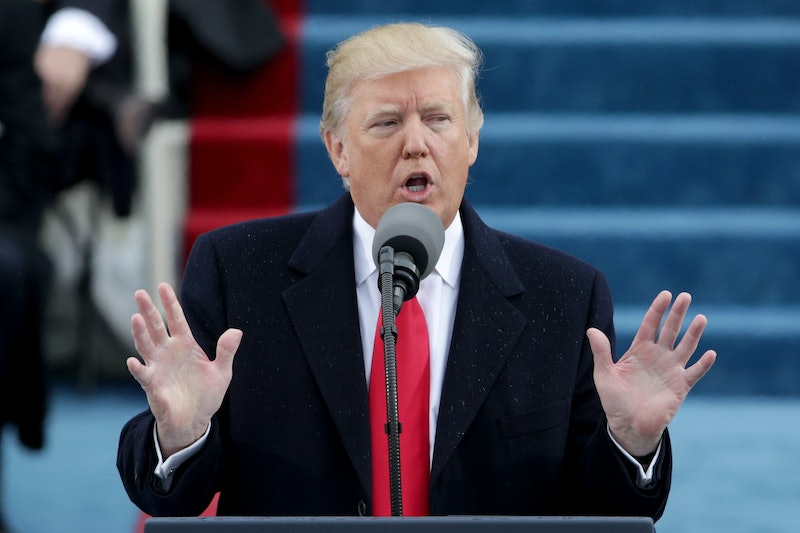 Not everyone is interested in President Donald Trump and his infamous Twitter rants. Yet, after Trump was sworn in on Inauguration Day, thousands of Twitter users discovered their accounts were automatically following @POTUS. But there's a logical reason why your Twitter account started following Trump's @POTUS account, despite how spooky it seems — and the short version is, it was just a glitch. Thank goodness, right?

I'll be honest: Given what we know about how Trump operates, I couldn't help but wonder if this whole automatic following thing was some sort of symbolic conspiracy — like, if we all followed him on Twitter, perhaps he thought we'd follow him in real life. Obviously that is not what actually happened, though; it turns out that the odd mass following of the current @POTUS account was a goof that occurred during former president Barack Obama's digital transition once he left the White House.

In a series of tweets posted on Saturday, Twitter CEO Jack Dorsey said the original plan was for people who were already following former president Barack Obama's @POTUS account to automatically start following the archival handle @POTUS44 at 12 p.m. ET. (The account is named as such because Obama is the 44th President of the United States.) All of Obama's previous tweets on @POTUS are now archived at the @POTUS44 account.

But the transition didn't go as smoothly as it was supposed to. As a result of a technical issue, people who were supposed to follow @POTUS44 ended up also adding @POTUS to their "Following" list — including people who weren't already following the account in the first place. Some people also began to automatically follow other government administration handles like @VP, @WhiteHouse, and @PressSec. Dorsey said in a tweet that about 560,000 Twitter users were affected as a result. As of Jan. 21, however, all auto-follows had been corrected.

Since I had already been following @POTUS for a long time, I didn't notice anything strange at first when I visited Twitter after Trump's inauguration. I simply figured that Obama's tweets had been wiped accordingly to make way for the new presidency and that Trump had taken over the @POTUS handle, with his new headshot image and cover photo. I did, however, notice that I'd automatically started following @POTUS44, Obama's new handle with the archived @POTUS tweets. (He's also apparently using his old @BarackObama handle for new tweets, too.) And when I typed @POTUS in Twitter's search bar at the top, two @POTUS accounts appeared in the drop-down menu: Both Obama's and Trump's handles.

But people who weren't already followers of @POTUS noticed the glitch much more quickly. Some Twitter users expressed confusion over the auto-follows, and understandably so:

This is the first time that our country's presidents have had to undergo a "digital transition." Considering that Obama was actually the first president of the United States to use a Twitter account, it's not too much of a surprise that a few bugs occurred during the changeover; after all, it's something that's never been dealt with before now.

It's also worth mentioning that, for now, Trump is keeping his personal Twitter account to continue providing social commentary on the television ratings of Inauguration Day, celebrities, and the state of the media, while the @POTUS account is being used for more administrative tweets.

Regardless of whether or not you were following @POTUS before or after Inauguration Day, it'll be interesting to see how Trump uses the @POTUS Twitter handle for the next four years. As a president-elect, Trump became known for bashing people publicly online. Will he use Twitter as president differently than Obama did? Time will only tell. I must say, the unintentional "follow/unfollow" Twitter glitch gives a whole new meaning to the Women's March protest chant, "tweet us with respect."