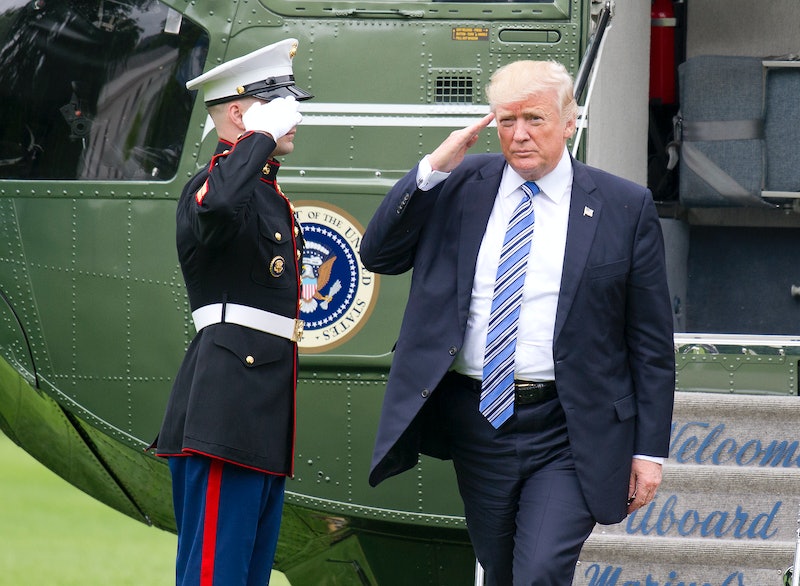 On Monday, the Washington Post reported that Donald Trump shared "highly classified" intel with Russian diplomats during a meeting last week. According to the report, during the president's Oval Office meeting with Russia’s Foreign Minister Sergei Lavrov and Ambassador Sergey Kislyak, his "disclosures jeopardized a critical source of intelligence on the Islamic State," which was based on accounts from former and current U.S. officials. Within minutes of the news breaking, Democrats were quick to denounce the president's reported behavior, but will the censure be so strong that a special prosecutor will investigate the alleged leak?

By the accounts shared with the Post, the president's disclosure could cause significant damage. One official who spoke with the Post said the information was "code-word," which means it was some of the most secretive, sensitive intel. To put it in perspective, that official explained, Trump “revealed more information to the Russian ambassador than we have shared with our own allies.” The intel was about the Islamic State and came from an "intelligence-sharing arrangement" with a U.S. partner, according to the Post report. Among other concerns, the alleged reveal could damage the United States' relationship with one of its key allies, which officials declined to specifically identify.

Trump's alleged disclosure was apparently not planned. The Post described it as Trump going "off script," according to officials. The alleged intel share was so potentially detrimental that senior White House officials reportedly immediately reached out to the CIA and National Security agency for damage control.

However, will the alleged disclosure warrant a special prosecutor? There are a few reasons why Democrats shouldn't hold their breath — at least for now.

For starters, what Trump allegedly did is not an illegal act. As the Post noted:

For almost anyone in government, discussing such matters with an adversary would be illegal. As president, Trump has broad authority to declassify government secrets, making it unlikely that his disclosures broke the law.

Yet, even with significant evidence that Americans want a special prosecutor and criticism from leading Democrats, the outrage hasn't materialized into action.

However, considering how new revelations about the president's behavior and concerns about his White House's ethics have been pouring out over the past week, plenty could potentially change.