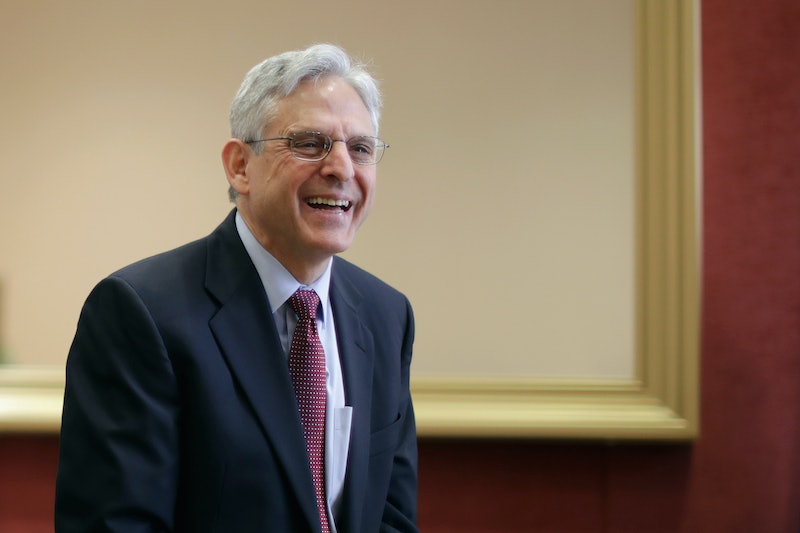 In a Republican, bizarro world, the chief justice of the second-most powerful court in the country would give up his seat to become FBI director for a president currently best known for firing the former holder of that position, James Comey. Sound improbable? It is. The fact that any on Capitol Hill are wondering whether Merrick Garland will replace James Comey as FBI director is in itself hard to believe. But that is in fact what one member of Congress suggested last week.

Specifically, Utah Republican Sen. Mike Lee proposed it in a tweet. "Instead of a special prosecutor, @realDonaldTrump should nominate Merrick Garland to replace James Comey," Lee wrote on Thursday. Garland is, of course, the highly qualified judge that Obama put forward as a nominee for Antonin Scalia's open Supreme Court seat. The Republicans in the Senate never even considered his nomination, betting that they could put forward their own nominee after the election.

That's, of course, what happened, which makes the most recent developments surrounding this Garland-for-FBI director story even more offensive (in addition to far-fetched). Over the weekend, a former aide to Republican Senate Majority Leader Mitch McConnell went on Fox News Sunday and talked up the idea. Former adviser Josh Holmes said, "I think the Senate majority leader thinks that’s a fantastic idea," going on to note that McConnell thinks Garland would be qualified and someone to support on a vote.

This won't happen, as many have pointed out. The best explanation probably comes from Dahlia Lithwick of Slate:

Garland probably won’t want to give up his lifetime tenure as the chief judge of the second-most important court in the land, and surely the most significant bulwark against Trump administration overreach, in exchange for a 12-minute gig on The Apprentice before he uses the wrong color highlighter and gets fired by a crazy person.

So why suggest such a thing? Perhaps Lee wanted to appear in the headlines or just to mess with people, particularly the Democrats. Plenty fellow senators gave interviews to the press after Lee mentioned the idea, and a couple Democrats even endorsed the idea — despite the fact it would ultimately hurt progressive policies when Trump got the chance to place a conservative to the powerful D.C.-based appeals court.

What would really be sweet justice is having Garland do both the FBI director job and the appeals court job at the same time. Republicans would flip out, but as The Atlantic reported, there's technically no rule prohibiting it.

That won't happen either, though, because Trump's goal in firing Comey was to make the FBI's Russia investigation go away. Surely whoever he nominates will have to promise to do just that, and I doubt Garland would be willing to make that kind of promise.