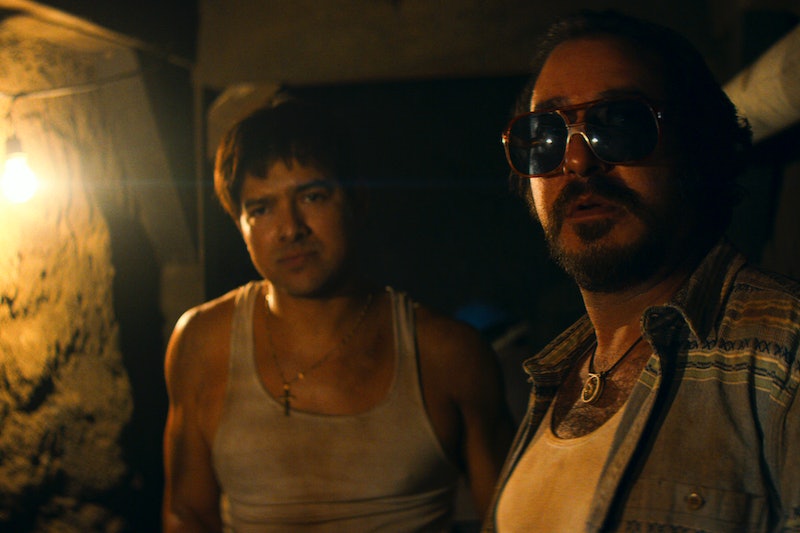 Narcos: Mexico is back, and with it comes a deeper exploration of the rise of the 1980s Mexican cartels and America's War On Drugs. While Netflix has yet to announce if Narcos: Mexico will return for Season 3, the amount of source material and the enduring popularity of the Narcos franchise means the show stands a pretty good chance of getting renewed. Fans likely won't have to wait long to hear the potentially good news: if the show follows the trend of Season 2's renewal, Netflix could announce its decision quickly just after the Season 3 premiere.

It's almost a given that there will be more seasons, considering that Narcos showrunner Eric Newman has a pretty strong relationship with Netflix. Per The Hollywood Reporter, Newman signed an overall multiyear series deal with Netflix in 2018, churning out Narcos, Hemlock Grove, and the movie Bright for the streaming service. While Netflix is notorious for not releasing its viewership numbers, the Narcos brand is one of the most long-running, successful ventures for Netflix, with the original Narcos series dominating the platform at the same time House of Cards and Orange Is the New Black were on.

Since Narcos: Mexico is based on real events that feed into modern day issues, there's undoubtedly more story for Newman to explore. The first season kicked off in Mexico by introducing the Guadalajara Cartel, and how Miguel Ángel Félix Gallardo unified several cartels under one banner. During the course of Season 1, Gallardo’s biggest rival for expansion ends up being Enrique “Kiki” Camarena, a real life Drug Enforcement Administration (DEA) agent who infiltrated Gallardo's operation and was ultimately kidnapped, tortured, and murdered by Gallardo's men.

Narcos: Mexico Season 2 will follow Operation Leyenda, which the DEA launched in the wake of Camarena’s death. On the show, fictional character Agent Walt Breslin will lead the charge, and the season will likely go over the messiness of the operation, including the suspicions that certain Mexican government officials and policemen helped to cover up evidence to protect the cartels. The second season also follows Isabella Bautista (loosely based on Sandra Ávila Beltrán) and Enedina Arellano Felix's break from Gallardo's union and their influence on the cartels' business.

As for what Narcos: Mexico could explore in a potential Season 3, Camarena's killing and Operation Leyenda marked a turning point for the fight against drug trafficking in Mexico. Per the BBC, the operation broke up the Guadalajara Cartel into splinter groups, with one of them becoming the Sinaloa cartel, led by a former protege of Gallardo, Joaquin "El Chapo" Guzman, played by Alejandro Edda in the series.

A third season could easily explore Guzman's rise to power, the story of Isabella and Enedina, or how the U.S. government struggled to address the ever mutating problem of drug trafficking in Mexico from that point forward. It's only a matter of Netflix making it official.