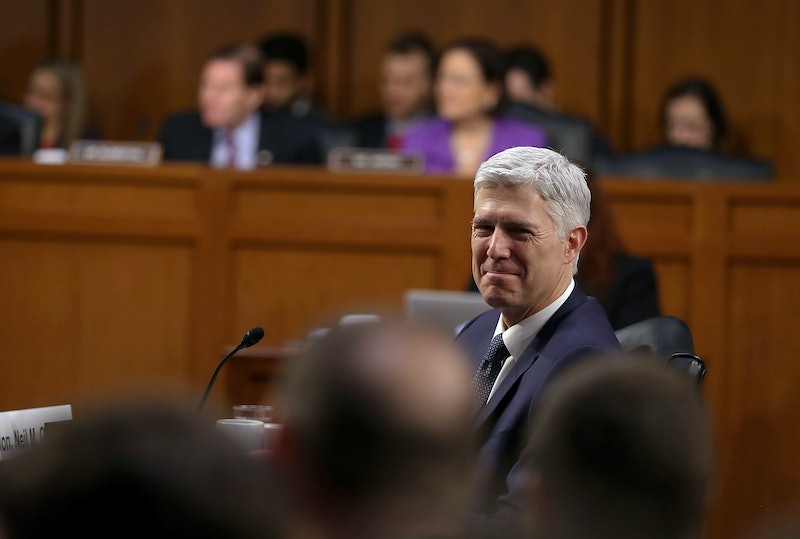 The Republicans are ready to move ahead with Neil Gorsuch's confirmation to the Supreme Court. But the Democrats sure aren't. He may have been voted out of the judiciary committee with a party line vote, but he's still a ways off from taking Atonin Scalia's old seat on the bench. That's because we're talking about a filibuster. The Dems have announced that they've reached the threshold to stop Gorsuch on the Senate floor — unless of course the GOP changes the rules. So will Republicans use the "nuclear option" to confirm Neil Gorsuch? Perhaps, but they should be wary.

As of now, to be confirmed to SCOTUS, a nominee needs to be confirmed by a majority of the body, which the Republicans have. But for a vote to be held, there needs to be a "motion for cloture," which cuts off debate on a topic. That can be delayed with a filibuster. And for a filibuster to be ended with a vote of the chamber, 60 senators have to get on board. That's why Democrats still have a card to play and can put the breaks on Gorsuch's nomination. With 41 Democrats opposed to his nomination, Gorsuch won't make it to the bench. But that's with the current rules.

Those rules could be changed. They are not written in the Constitution, but are rather the rules of the Senate. That's what is called the "nuclear option," reducing the number of votes needed to end the filibuster to a simple majority. That already happened back in 2013, and Democrats did it to ensure that President Obama's appointments would make it through — you may not remember but the GOP was being particularly obstinate at the time. But the rule change did not apply to Supreme Court confirmations.

Republicans may decide to do this. But at what cost? The idea of keeping the rule is that it will be harder for the other side to nominate a justice whose judicial philosophy you completely disagree with. What if Democrats win the presidency and a slim majority of the Senate in the future? The Republicans could diminish their future influence. Plus if we mess with norms, what's to stop a future president from court packing?

What Democrats would be wise to point out to their Republican colleagues in Washington is that they're only being as obstinate as the GOP senators were last year when Scalia died. The GOP stopped Merrick Garland's confirmation in its tracks. Stealing the seat from Obama is unprecedented. A filibuster is thus the least they can expect.