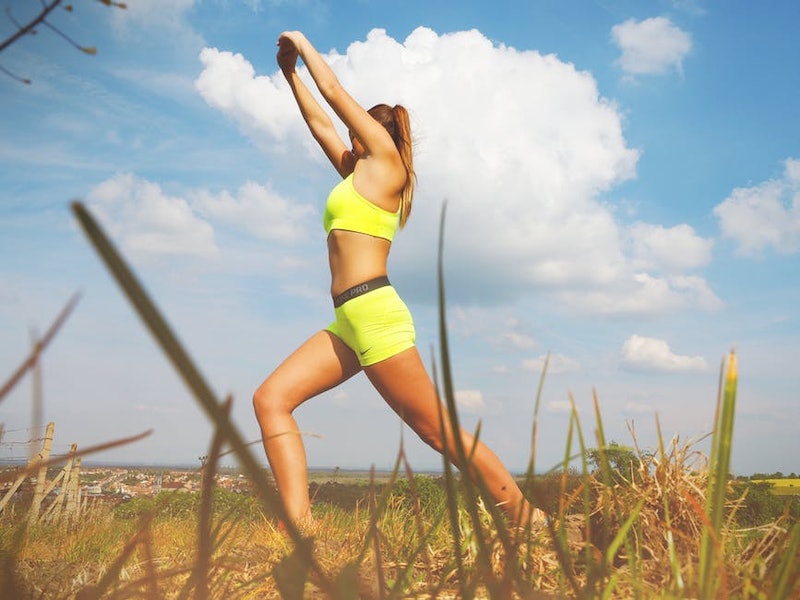 You don't need anyone to tell you that you need to stay physically active to feel young, healthy, and fabulous; but new research reveals that literally, physiologically, working out keeps you young — and that includes your cells. It's not like we needed more proof that our regular sweat seshes are good for us, but we got it anyway; and the differences found between active people and sedentary people were a bit surprising.

The study, which involved nearly 6,000 adults over the course of several years, found that biological aging markers — telomeres, in this case — in people who stay very physically active appeared nine years younger than the biological aging markers in people who don't get much movement. Researchers studied their telomere length (telomeres are proteins that cap off chromosomes), and how fitness affects them. Typically, people with shorter telomeres die sooner than people with longer ones, and they're also likelier to develop certain chronic diseases, according to Professor Larry Tucker, who authored the study.

So, who came out on top? People who got their sweat on for 30 to 40 minutes a day, at least five days a week, were the winners, with noticeably longer telomeres. More moderate exercisers saw some benefits, but nothing like their more active counterparts.

Aging causes telomeres to shorten and leads to gradual cell deterioration; but these results indicate it's possible that physical activity helps preserve telomeres and thus lower people's risk of disease.

While noting the differences in telomere length may be a newer discovery, it's not the first time we've heard of it. In fact, other research confirms these findings, learning that physical fitness helps protect our telomeres from shortening, thereby holding off the aging process. In another study of cyclists between the ages of 55 and 79, researches learned that across the board, the participants didn't show their age. Overwhelmingly, their balance, reflexes, memory, and metabolic health more closely resembled levels belonging to younger adults, suggesting that overall, aging is different for active people. In another study, researchers found that taking up an exercise routine for even just three months had substantial effects on the skin of participants, making it appear younger looking.

Even without the realization that exercise actually keeps your cells younger, there are countless other benefits of working out that help you feel better regardless — like an improved mood, more energy, better sleep, sharper memory, higher productivity at the workplace, and stronger relationships with those close to you — and this doesn't even cover it.

So, get moving! Whether it's practicing your yoga poses, going for a run, or pumping iron to improve your gains, staying active is one of the best things you can do for your body and mind.

More like this
5 Crystals For Anxiety
By Megan McCarty
5 Crystals To Manifest Better Sleep
By Megan McCarty
The Case For A Hard Launch Summer
By Morgan Sullivan
Are Gemini & Scorpio Compatible In A Relationship?
By Kristine Fellizar
Get Even More From Bustle — Sign Up For The Newsletter