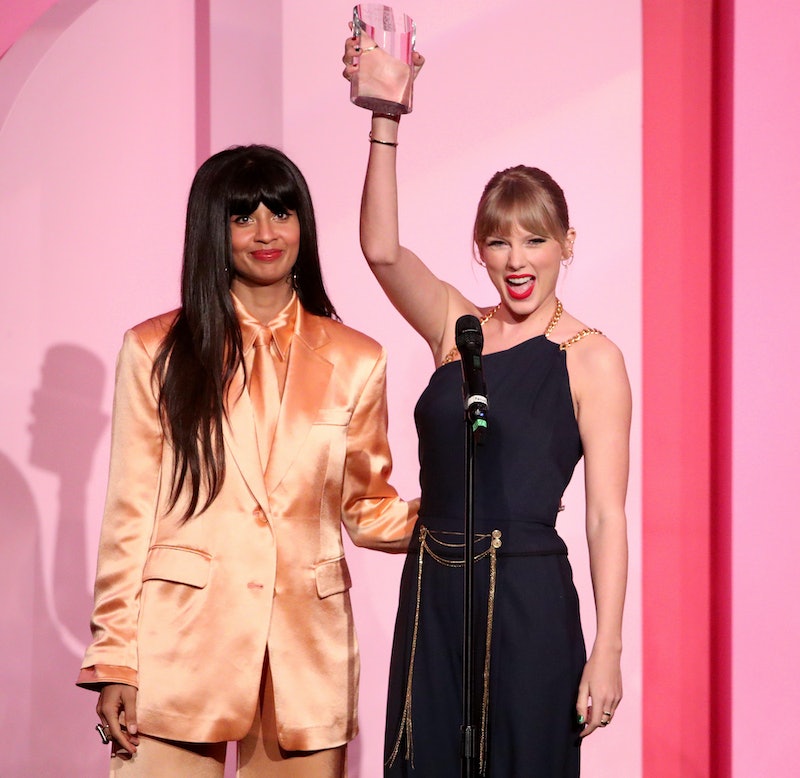 We officially have someone to blame for Taylor Swift's bad dancing — other than Swift, that is. During The Good Place's Jan. 16 episode, Tahani casually revealed that she spent "the longest four years of [her] life" trying to teach Swift how to dance, which is saying a lot for someone who has been tortured in the Bad Place for roughly a century. Had Tahani been successful, we could have avoided ever having to bear witness to Bombalurina shimmying in Cats. Though to be fair, Jason Mendoza probably would have been a better teacher.

It's all in good fun, though: not only is Tahani good friends with Swift in The Good Place (but not best friends, as she once clarified to Eleanor), the actor who plays her, Jameela Jamil, and the real Swift have publicly shared a mutual appreciation for one another. Ahead of her 30th birthday last March, Swift shared 30 life lessons in a feature for Elle, in which she cited Jamil as a "voice of reason" regarding how society treats women. Swift brought up Jamil again last November when she named her as a leader in the body neutrality movement during an interview on Apple Music's Beats 1, as well as in her December profile as one of People magazine's People of the Year.

Jamil returned the favor in December, when she praised Swift's musical accomplishments, LGBTQ+ advocacy, and outspokenness on gender inequality while presenting her with Billboard's Woman of the Decade award.

Besides, it's not like Swift isn't in the joke: by now, the fact that she's a bad dancer is part of her brand. When you think about it that way, Swift probably owes Tahani some royalties.

More like this
Everything To Know About Taylor Swift’s 10th Studio Album, 'Midnights'
By Grace Wehniainen and Jake Viswanath
There's A Taylor Swift Easter Egg In Ryan Reynolds' 'Deadpool 3' Teaser
By Marina Watts
'School Of Rock' Changed Joe Keery's Life Forever
By Alyssa Lapid
Is Dua Lipa Dating Trevor Noah? New Photos Show Them Kissing & Hugging
By Brian Anthony Hernandez and Martha Sorren
Get Even More From Bustle — Sign Up For The Newsletter