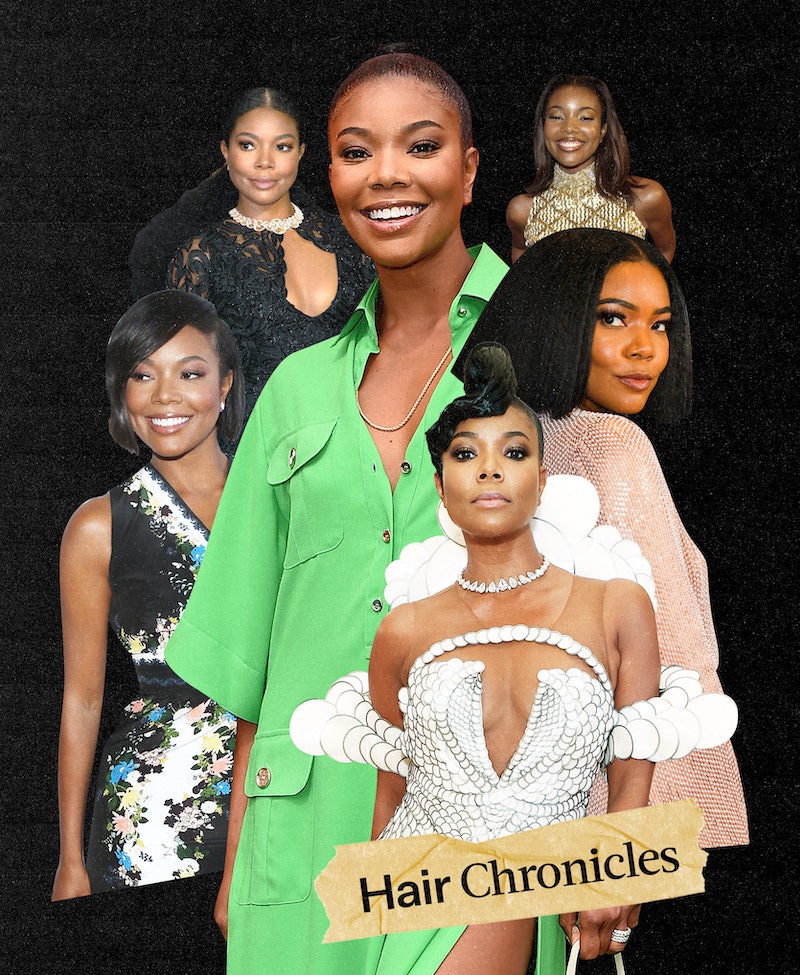 In Hair Chronicles, celebrities tell us about their most memorable hairstyles throughout the years, from the ones they’d wear again to those they completely regret. Here, Gabrielle Union talks about her natural hair journey, the relaunch of Flawless by Gabrielle Union, and her newfound perception of beauty.

Gabrielle Union has come a long way from dunking her hair in peroxide. (Yes, that was her go-to DIY dye-job in her teens.) Now, the 49-year-old actor has started over with her hair — resetting with a big chop not once but twice — and embraced her natural texture on the red carpet, wearing looks that have helped shift the outdated narrative that natural hair isn’t glamorous, jaw-dropping, professional, or beautiful.

It’s a narrative that, like a lot of Black women, Union used to believe. In her twenties, she only felt beautiful when her hair was long and straight. “I used to associate length with beauty,” she candidly shares with me via Zoom. “And if you didn’t have the length or look like Halle Berry, it was over for you. I clung to any kind of extension or long style in order to feel my best. It felt like that was the only way I could feel attractive.”

Nearly two decades later, she fiercely loves her curls — but her hair journey hasn’t been smooth-sailing, and Union chuckles as she recalls the bumps she’s had along the way.

“I’m one of those people that gets frustrated with a curl,” Union says. “I’ve learned if you really want to commit to the natural hair journey, know it requires a lot of patience. I've just been a guinea pig on my own head.” She’s learned from other heads in the Union-Wade household as well: The family is trying to see how long they can go heat-free, and Union recently reached six months.

The actor hopes her hair care line Flawless will help those with afro-textured hair along their own journeys. But back when it first launched in 2017, the brand wasn’t what she had hoped it would be.

“The original incarnation was not a F.U.B.U. [for us, by us] operation,” Union says. “I was more of a figurehead and wasn’t able involved as I wanted to be. I didn’t have the final say on anything.” Union was frustrated, and to her, the brand didn’t feel authentic. “Our company didn’t look like the consumer at all,” she tells me. “When that deal expired, I took the reins to reclaim the company and do it my way.”

Union turned to a trusted member of her glam squad to make Flawless what it needed to be. “I partnered with one of my best friends and celebrity hairstylist Larry Sims, who’s the mastermind behind many amazing hairstyles of the who’s who in Hollywood.”

Together, the duo remade Flawless 2.0 and relaunched in July 2020, with natural hair-loving products all under $10. “We want to make [Flawless] even more accessible and create more products,” she tells me passionately. The star is inspired by her on-going journey reforming her relationship with her hair. And it turns out, herself.

“It was spiritual,” Union says of her big chop in July. “Cutting off some of that dead weight allowed more space for more to come in and grow.”

After the cut, Union’s hair grew faster than ever. “By September, I could put it in a ponytail,” she says. But she wasn’t attached to her new inches. “I been fly,” she tells me with a matter-of-fact smile. “And I don't need to be a slave to any Eurocentric beauty ideal to be thought of as beautiful or fly or worthy.”

Below, Union comments on her standout hairstyles throughout her career.

“This might have been my first center part and long shaggy bob weave for the Bring It On premiere. I was definitely feeling myself.”

”One of my favorite looks of all time. I love a snatched-back power pony. For my first and only time being invited to the Emmy's, I wanted to give snatched drama.”

“I love a short bob. It felt cool and fresh and unlike anything I've done recently. I felt like a rockstar.”

“This one was a beautiful, structural, textured ’70s-inspired bob, and I felt glorious. Very Lola Falana vibes.”

“I love the textured structure of this bang-slash-baby hair story we told for the Met Gala.”