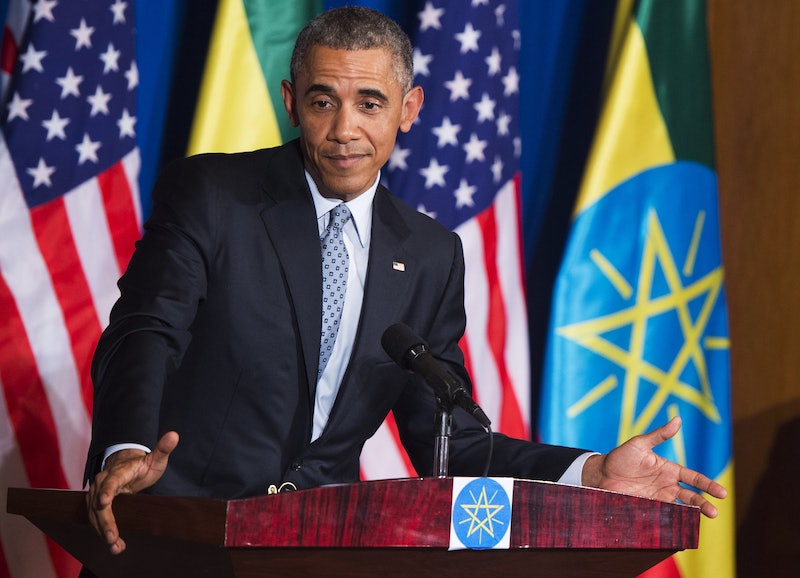 President Obama is not shy when it comes to busting a move in public. While attending a state dinner in Kenya over the weekend, the president showed off his dance skills alongside Kenyan President Uhuru Kenyatta. The two leaders danced the lipala, a traditional dance recently made cool again by the Kenyan band Sauti Sol. Obama's dancing has improved a lot since he first took office, but he still dances like a dad. We can't really blame him, since he is a dad, after all. Just like your dad at a family wedding, Obama's dancing is always a little goofy and awkward, but in an endearing way. His moves are probably embarrassing for Sasha and Malia (we've all been there), but they're just plain entertaining to the rest of the world.

At least he can keep a beat, and managed to pull off the lipala surprisingly well. Past presidents have been awful dancers (I'm looking at you, George W. Bush), so Obama's skills are a huge step up for America's dancing reputation. He's showed them off multiple times over the years, from the campaign trail to The Ellen DeGeneres Show, performing the best dad moves every time.

Here are four other times President Obama proudly danced just like your dad.

While running for president in 2007, Obama went on The Ellen DeGeneres Show and shocked everyone by doing a little jig. Ellen DeGeneres even complimenting his dancing, saying, "You got some moves!"

Last Christmas, Obama danced with Santa Claus and Fifth Harmony during the National Christmas Tree Lighting Ceremony. Everyone else mimicked his epic dad moves, so he wasn't alone in his awkwardness.

The a cappella group Brotherly Love serenaded Obama while he campaigned for Pennsylvania Governor Tom Wolf in 2014. He joined the group's clapping and dancing, and actually fit in pretty well.

On a presidential campaign trip to Puerto Rico in 2008, Obama pulled out his trusty moves before giving a speech to the crowd of people cheering him on. Apparently, it worked, because we elected him twice.

While he has some good moves, President Obama will never be as good a dancer as the First Lady. Michelle Obama has done multiple choreographed dances for her "Let's Move!" campaign, and she blows everyone away every time. She definitely doesn't dance like the average mom. Maybe she can give President Obama a few lessons.