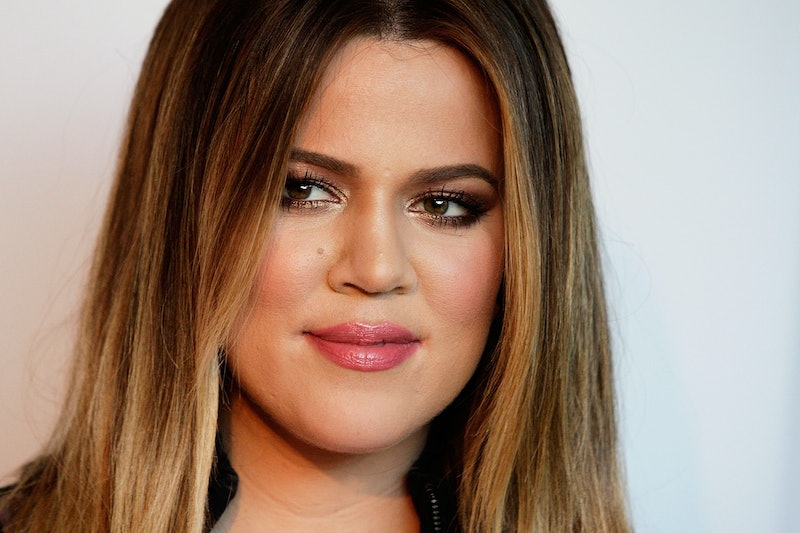 There's no doubt that Khloé Kardashian knows how to make a statement. And on Monday, July 27, the Keeping Up With the Kardashians star made yet another declaration that is both empowering and absolutely gorgeous. Khloé Kardashian shared an "unretouched" photo from her 2015 Complex magazine cover, which demonstrates that she too has "flaws." It proves that just because a photo is retouched doesn't mean it's a complete lie. Kardashian makes the point that she does work hard to keep in shape — her body isn't the way it is because of retouching. Along with the Instagram photo, which is showcased alongside the edited photo featured in the magazine, she wrote:

This one is for all the troll haters out there that cannot seem to give me an ounce of credit for my daily workouts! The image on the left is an unretouched photo from the actual camera on the day of the shoot. The image on the right is the retouched photo. Yes skin is smooth and shadows are removed but I still think I look good on the left image. Flaws and all ... hi hater!!! Click on it... I know you want to.

As you can see below, it's hard to tell which photo is retouched. If Kardashian hadn't pointed it out in her caption, I'd still be trying to figure it out. Don't they both look the same? It isn't a secret that both online and print publications usually Photoshop their pictures. That has unfortunately become the norm, so you have to admire the 31-year-old reality starlet for admitting that the photo was edited for publication, and for showing how proud she is of her body.

When you're constantly in the public eye, it takes a lot of courage to say, "Yeah, I have flaws just like everyone else, and here they are for the world to see." And it's beautiful how Kardashian embraces her true self and loves her body, "flaws" and all. Like she wrote in the post, I too think she looks amazing in the unedited photo, and don't really see much of a difference. She's totally rocking this shoot, and she probably would have earned as much praise, if not more, if the photos were published without any Photoshop at all.

It would be nice if, one day, photos didn't have to be retouched. Why can't the original images be shared? If you ask me, when we do get to see the originals of celeb photo shoots, they're often even more gorgeous. Plus, they send the message to society that no one person is perfect. Everyone is imperfect, which is a beautiful, beautiful thing. Here's hoping that, sooner rather than later, "flaws" are no longer seen as, well, flaws -- and instead as things that make a person unique.

More like this
Olivia Munn Got Real About How Her Body Hasn’t “Snapped Back” Post-Pregnancy
By Stephanie Topacio Long
Prince William & Lorraine Kelly Lead Tributes To “Truly Remarkable” Dame Deborah James
By Sam Ramsden
Will Beyoncé Be At The BET Awards To Perform “Break My Soul” Or Attend The Show?
By Jake Viswanath
Fans React To Kelly Holmes’ “Extraordinary” ITV Documentary
By Sam Ramsden
Get Even More From Bustle — Sign Up For The Newsletter