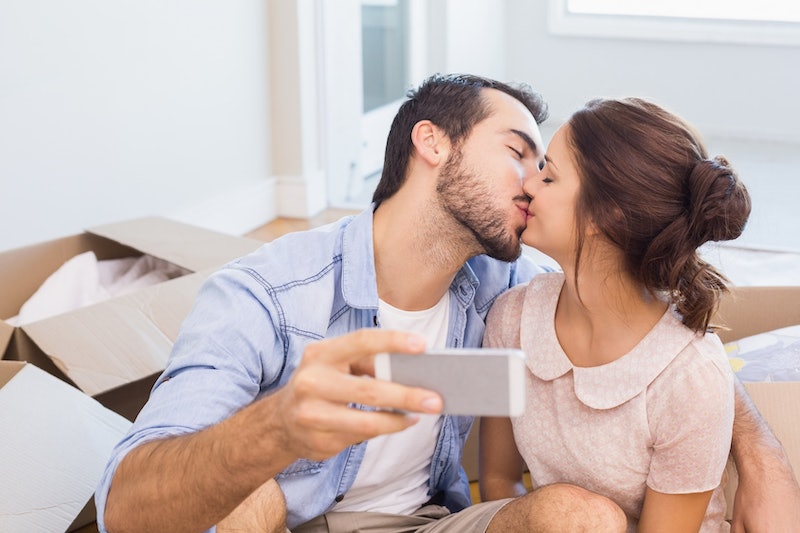 When you're thinking about moving in with your boyfriend or girlfriend, it can seem like an exciting whirlwind of activity as you look at apartments and buy duvets. If you're anything like me, though, keeping track of all of the dos and don'ts of moving in together creates a lot of anxiety. If you've lived alone, your personal space is about to go out the window. If you've been living with your college roomie for six years, you're going to have to adjust to a new human being's routines, flaws, and idiosyncrasies. And I don't care if you already spend almost every night with your significant other — it is not the same as living together under the same roof.

As a wedding planner, nearly all of my clients live together before they get married, and I've definitely heard some hilarious (but very enlightening) stories about the trials and tribulations of merging households. So how can you move in together without ruining your relationship, and is there any way to bulletproof yourselves and ensure success? I'm not sure if that's possible, but thanks to my two failed cohabitation relationships and countless stories from couples I've worked with, I've come up with a few solid guidelines to help you navigate this new territory.

This seems simple, but it's good to define exactly who will be doing and/or paying for what before you start packing. If he wants an expensive cable package that you'll never use, are you OK with still being responsible for half the cost? Who will do the laundry, or will you keep your laundry separate? Both times I lived with a guy, I ended up doing about 95 percent of the cooking, cleaning, and laundry. Lesson learned: We should have worked out an agreement beforehand. Figure as much as you can out before signing that lease.

2. Don't: Do It For The Wrong Reasons

Living together isn't an engagement or a marriage. It's just not. If that's what you think you're getting, you are not going into it with the right mindset. Also, just because his apartment is closer to your office is not a good reason to move in together. Don't move in together solely because you're broke. That also falls under "wrong reasons." The right reason is pretty simple: You want to take the next step in your relationship, and now is a reasonable time.

You might think that living together will mean that you'll have sex every night. Nope. Not realistic, sorry. Sure, this is the case for some couples — but definitely not for all. You might have to start putting effort into maintaining a sex life. Maybe not right away, but eventually it may be something that doesn't come so naturally. If you get to that point, put on something sexy and do that thing that you haven't done in ages. Make sex an event, not an afterthought. Beyond that, romance is about way more than sex. If you know your partner hates unloading the dishwasher or cleaning the gunk out of the sink, make an effort to do that for them. You'll be glad you did.

5. Do: Be Prepared For The Worst (But Hope For The Best!)

You might break up. There, I said it. Right now, this relationship might feel like the most natural thing in the world, but that can change. I've lived with two people, both of whom I really and truly believed I would marry. But it didn't work out that way, and both times, I was thankfully prepared to handle things on my own. Breaking up when you live together is the absolute worst, but you can mitigate some of the disaster by having a plan in place. Ask questions like who will move out, if that person is responsible for finding another roommate, what part of the deposit you are both responsible for, etc.

6. Don't: Forget About Your Friends

I love Netflix and sitting on the couch with my significant other, too. But it's so crucial not to neglect your friends when you start living with someone. It's easy to get wrapped up in a schedule of having dinner and hanging around the house together. Be active in making plans with friends, and if you're invited out, go! You'll be glad you did, and let's not forget that alone time is healthy.

7. Do: Align Your Schedules

If I had to name one reason my last cohabitation experience didn't work, this would be it. We just didn't make an effort to match up our schedules. I would get up early and go to bed early; he would play FIFA with his friends until one in the morning. Part of it was inevitable, as our work schedules and demands were different — but that made it even more imperative that we figure out other ways to spend time together that wasn't at 11 p.m. in front of a TV. Even if we had just sat on the porch together having quality conversation, it would have helped. Obviously, it's good to have your own lives, but you've got to have a few nights of the week where you're on the same page. That means compromise!

More like this
August 2022 New Moon Do’s & Don’ts
By Brittany Beringer
The Best Time To Date After A Breakup, According To Experts
By Bustle Editors
20 Things You Should Never Tolerate In A Relationship
By Rachel Sanoff and Kathleen Ferraro
12 Ways You're Sabotaging Your Love Life
By Teresa Newsome and Lexi Inks
Get Even More From Bustle — Sign Up For The Newsletter