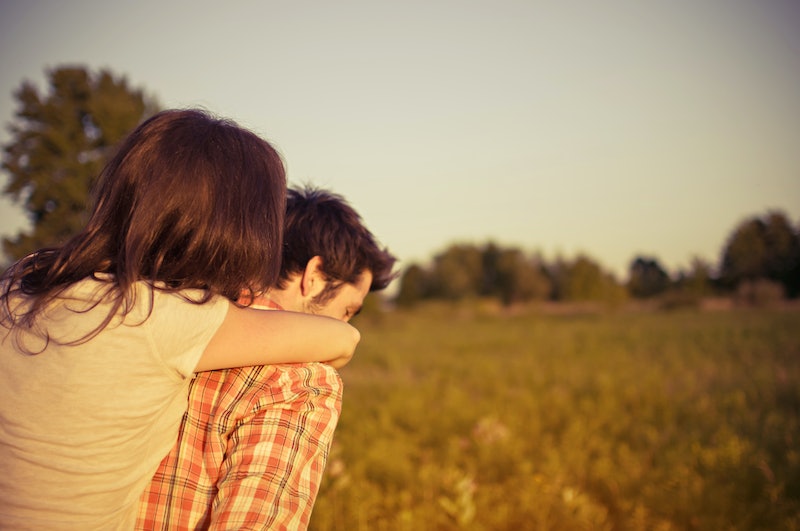 So you've been hanging out for a few months and it's going great. You're starting to really, really, really like them. But you can't seem to stop yourself from questioning everything. Hey, we've all been victims of overanalyzing in a relationship, when we take the most innocuous instances and turn them into something absolutely insane. And don't even get me started on the insanity that social media has introduced into this habit of overanalyzing. It's so easy to go down that rabbit hole, and before you know it, you've spent two hours stalking his or her followers on Twitter and Instagram. It's not productive, folks.

Though it's particularly easy to overanalyze in new relationships, couples in long-term relationships do the same thing. As a wedding planner, I've seen plenty of couples dissolve into fights that are rooted in overanalyzing something that's basically meaningless. "Well, you didn't respond to the texts I sent about the centerpieces," they say. "I was busy at work," the other replies. It may seem mundane, but by the way they fight about it, it's like the third World War. So take a deep breath before having a meltdown over the following instances.

If I had a dime for every time I took a screenshot of a text from a guy and sent it to five of my friends, I would be a rich, rich woman. Ladies, can we band together and try to stop doing this? It's not productive at all. Sometimes, "K" just means "K." If he's asking about your day, he probably wants to know how your day is. And here's the real kicker: If you're not sure what he means or what he or she is talking about, you can ask them like the grown-ass woman you are.

We all have a past. Some of us have a particularly long past, while others have one or two relationships. So what if your partner used to hook up with a ton of people in college? We aren't in college anymore. And who cares if he or she has slept with more partners than you have? All that matters is that you trust the person now. If you don't, your problems are a lot bigger than a fear of past relationships. It's normal to feel a degree of jealousy, but don't go psycho if his or her ex likes something on Instagram. Maybe they just liked the photo because, well, they like it — and not to make some sort of statement.

Sometimes, it can feel like our relationships are repeating themselves, or like we're dating our ex all over again. Maybe they both just happen to like Calvin Harris, did you ever think of that? Maybe they both actually do love cheap Italian food. Maybe your ex and your current partner both do the same thing that infuriates you.

Don't freak yourself out over it. Life happens. The more people you date, the more overlap there will be. A bride whose wedding I planned confessed to me that for years, she was really bothered that her soon-to-be husband drank his coffee the exact same way her longtime ex did. Finally, she said, "I realized that probably lots of people take their coffee that way." She's right!

Some people are really cautious with social media. Some people post everything and don't care. If your significant other never writes on your Facebook wall, never tweets you back, and never likes your Instagrams and it really bothers you, you can bring it up casually. But just because he or she doesn't post a status every time you go somewhere doesn't necessarily mean anything. Just like it doesn't mean anything that you don't favorite every single one of your their tweets. Not worth worrying about.

The best part of a relationship is being honest about who you are and being accepted for it. If you're constantly in fear of speaking your mind and letting your true colors shine, that's not fair to either of you. Don't overanalyze the moments when you've been vulnerable. If he or she's not ready for that, then you don't want to be in a relationship with them. It's pretty simple. If you're thinking of someone, it should be fine to send a text saying "hey, I'm thinking about you!" and not feel sick to your stomach waiting for a response. Most people, I think, respond to openness and vulnerability with the same thing.