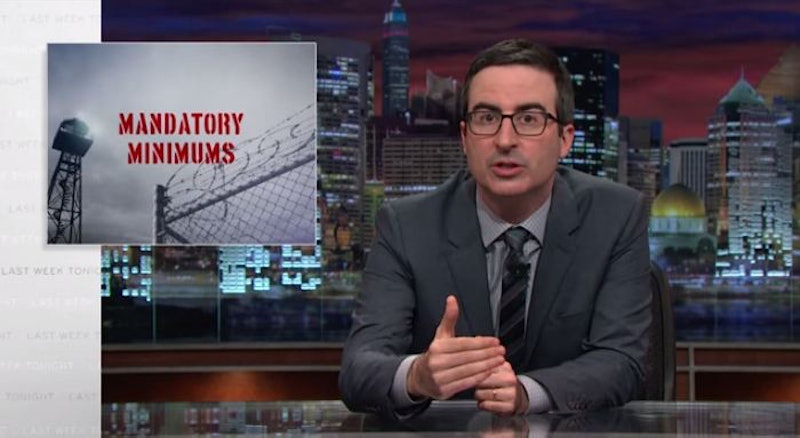 Oliver opened his segment by calling Obama's clemency action "the criminal justice version of Top Chef: Last Chance Kitchen, but with the chance to walk free rather than the opportunity to, once again, disappoint [judge] Padma [Lakshmi] with your risotto." But then Oliver turns to the hard — sorry, difficult — topic at hand. He said that mandatory minimums "require judges to punish certain crimes with a minimum number of years in prison, regardless of context." Oliver said this is really weird, because context is often key in a number of situations:

For instance, shouting the phrase, 'I'm coming,' is fine when catching a bus, but not OK when you're already on the bus. Circumstances make a huge difference — that's what I'm trying to say.

Oliver said that mandatory minimums were mostly passed during the tough-on-crime era of the '80s and '90s, and they've seriously contributed to the "explosion" of our prison population. (In his speech, Obama pointed out that the U.S. is home to five percent of the world's population and a staggering 25 percent of the world's prisoners.) Oliver flashed to a news segment about how the U.S. prison population has quadrupled since 1980, which means that roughly one out of every 100 adults is now behind bars. Oliver joked about just how many prisoners that actually means, and referred to an experiment in 1788 in which England banned its prisoners to a colony in Australia:

We have two million people incarcerated. If we keep going in this direction, we'll soon have enough to populate an entire new country with prisoners, and trust me when I say that is not a good idea. Literally the only good thing to come out of that experiment was Hugh Jackman and that took 180 years. It was worth it, but it was a long time ... but it was worth it.

Then Oliver got serious, and showed a clip of Kevin Ott, a prisoner who received life without parole for possessing three ounces of methamphetamine. Oliver called this "insane":

Oliver said most of America's mandatory minimum sentences for drug crimes were written in the '80s and '90s when the U.S. was "in the grips of a full-fledged anti-drug hysteria." He showed hilarious clips that were shown on TV as anti-drug propaganda. But then Oliver showed a senator who went to prison for fraud and realized that mandatory minimums have no deterrent effect, because perpetrators often aren't aware of the punishment for drug crimes. And then Oliver dropped the greatest penis analogy ever:

Ridiculously long sentences are not a great deterrent to crime. Prison sentences are a lot like penises — if they're used correctly, even a short one can do the trick... is a rumor I have heard.

But Oliver quickly returned to the serious side of the issue, because "the truth is, mandatory minimums didn't just not work — they ruined lives":

Take the case of Weldon Angelos, a nonviolent, first-time offender. When he was 24, he sold small amounts of marijuana while he happened to have a gun in his possession, and, as a result, he received a 55-year mandatory minimum sentence with no parole. He won't get out until he's 79 for selling something that's currently legal for recreational use in four states and whose main side effect is making episodes of Frasier slightly funnier.

Oliver pointed out that Angelos wasn't the only one affected by his sentence. Angelos' two sons, who were five and seven when he was sentenced, "were just destroyed." Oliver cut to a clip of one of Angelos' sons saying that 55 years was just way too much. Shockingly, former Judge Paul Cassell, the judge on Angelos' case, agreed with this:

Oliver summed up the absurdity of the sentence with some simple math:

So wait, if my math is right here, this low-level pot dealer received the exact same sentence as would an air-plane-hijacking, child-raping terrorist. A person so evil, I legitimately don't know if one has ever existed.

More like this
Yinka Bokinni Recalls Terrifying Truth At Heart Of 'How To Hire A Hitman'
By Frances Stewart
Where Is Oscar Torres In 'Only Murders In The Building' Season 2?
By El Hunt
For These Abortion Clinic Volunteers, Going TikTok Viral Is A Risk Worth Taking
By Audra Heinrichs
What Is Happening With Sheku Bayoh’s Case?
By Sophie McEvoy
Get Even More From Bustle — Sign Up For The Newsletter